We might as well get it out of the way before we get stuck in. The last few WRC titles, developed by Italian studio Milestone, have been rather mediocre. When the developer got switched around and the folks behind the rather terrible Motorcycle Club (PS4) assumed duties - we expected things to proceed along the same path towards mediocrity.

Over the course of a week we spent an unhealthy amount of time with WRC 5. We've played through the career mode using the PS4's DualShock 4, sampled the Xbox One version via a Mad Catz wheel, and obsessively perfected our stage times with the Thrustmaster T300RS back on PS4.

It turns out that we were terribly wrong about Kylotonn Games and their abilities. This is a work of quality from start to finish, and a rally experience that exceeds everything that Milestone has managed over the years with the license. It's a game that would have competed with the upcoming Dirt Rally if it wasn't for the occasionally dull visuals.

Let's start with the most important component of any racing game; the car physics. This is true regardless of whether it's an arcade-inspired racer like Burnout or a proper simulation like iRacing or Assetto Corsa. Last year's WRC 4 offered a sloppy mix of poorly calculated friction physics, and a terrible sense of speed. This along with boring graphics made for a rather average racer and one we never returned to post-review.

WRC 5 is a massive improvement and the physics are far more realistic. Kylotonn Games have obviously worked hard to recreate what a 300 horse power, 1200kg rally car behaves like on gravel, snow and asphalt - and they have succeeded without necessarily having focussed on full-on realism. The cars have a lot of torque, the controls come across as detailed and full of precision, regardless of whether we play with a wheel or a controller, and there's plenty of feedback from the tyres.

The sense of speed is somewhat lacking, and it never truly feels as if we're flying along Finnish country roads at 150 miles an hour, but the balance between torque and top speed is very good, as is the balance between friction and gravity. You can't throw yourself into the winding roads with careless abandon as you could in the previous iteration, instead you need to pay attention to the instructions offered. It's all about getting to know the car, finding your rhythm, and then maintaining it.

WRC 5 does a great job teaching the driver the most important principles of real-world rally racing without resorting to tired tutorials. Via great feedback from the friction physics we're given all we need to get a sense of whether our rhythm is good enough or whether we need to pick up the pace. Push too hard and you'll be penalised quickly and you don't win rallies sitting next to the road. If you play it too safe, you'll soon notice that the car isn't behaving as well as it should, as they've been tuned to be pushed to the max in the respective conditions you're racing in at any given moment.

The co-driver (who provides you with notes) and the system that underpins this feature has been a source of problems for many a rally game. Either they read notes to loosely so we hear them after the fact, or they read out too many notes at once, which makes it difficult to keep track of things. In real world rallies this is a dynamic you work out with your co-driver, striking a balance that works for both and is as efficient as possible. No driver/co-driver combination is exactly like another, which is something that makes it difficult for developers making games based on the sport when they're looking to find the ideal way to portray this relationship.

With WRC 5 Kylotonn Games have opted to simulate a real co-driver rather than the simplified versions you'll find in games like the Colin McRae and Dirt. It takes us a couple of hours to return to our rally-feuled youths and start to think as you should, corner by corner, turn by turn. Rally is as much about controlling your car at the limit of what's possible, while keeping the notes in your head and positioning the car where the instructions indicate before the road starts to turn. In our opinion WRC 5 is brilliant as far as this goes, even if it takes a while to get used to the frenetic bombardment of directions. As we settle in, three corners ahead at all times, a flow starts to appear. It also pays dividends in our stage times as we move from a lowly 12th position up to 2nd in some of the more challenging stages of the most difficult rally competitions in the world.

Apart from single rallies or jumping straight into selected stages, WRC5 offers a driver's school, a career mode, and an online element that allows you to download ghosts and climb leaderboards.

The driving school is one of the best parts of WRC 5 as the developers have succeeded in striking a balance between the basic instructions that any driver needs to possess, and more advanced tricks. We made our way through this educational offering in our first evening with WRC 5 and got the same vibes as with the license tests in the original Gran Turismo. Challenging, educational for those not already in the know, while at the same time offering a good way to brush up your skills for returning enthusiasts.

The career mode fails at offering any sort of fresh take, as it pretty much recycles old parts from previous games while borrowing from Codemasters' F1 and Dirt titles. It's not necessarily a bad thing, but the formula works and it's rather enjoyable to take your rookie driver from the likes of J-WRC all the way up to the elite. However, a few cutscenes and some personality would have been nice.

The visuals are really the only area that disappoints. We didn't expect anything approaching say Driveclub, and we don't expect top notch graphics in a simulation, but we did expect better environments. WRC 5 isn't an ugly looking game, but compared to Dirt 3 and the upcoming Dirt Rally (currently in Early Access) it's outclassed. The damage modelling is weak, even if the load times, presentation and the clever menus impress.

The sound, however, is fantastic. Kylotonn has delivered the best and most realistic engine and exhaust sounds we've heard in a modern rally game. The rattling, the screaming engines, the whining turbo and a whole range of other sounds made us smile every time we put our foot down. In addition to a great co-driver and a rather agreeable speaker voice, this really has everything you could ask for from an audio perspective.

WRC 5 is a great rally game that, on the highest difficulty and with a great steering wheel, offers a more realistic and challenging experience than any previous WRC title. It's not particularly pretty, doesn't offer a lot of variation, and features a rather lacklustre career mode, but behind the wheel and in the middle of the forest it's as exciting and challenging as a great rally game should be.

"Behind the wheel and in the middle of the forest, it's as exciting and challenging as a great rally game should be."

Racing across gravel, snow and tarmac.

WRC 5: "We wanted to bring across how diverse rallying actually is"

We chat with Kylotonn Games' Diego Sartori about their first stab at the WRC license. 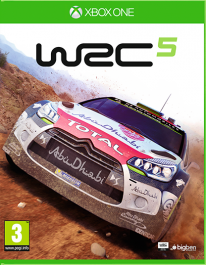