World's End Club has been available on iOS devices since last year, but it took Too Kyo Games some time to bring their new game to the Nintendo Switch. This adventure is a road trip disguised as a visual novel, mixed with elements of 2D platformers. Most of the time it tells a fairly straight forward story, but every so often the influences of the creative Japanese developers, who captivated us with impressive stories such as Danganronpa or the Zero Escape series in the past, are shining though World's End Club's low production values.

At the heart of this game is a group of young pupils. The members of the so-called Go-Getters Club are troublemakers who are involved in an accident at the beginning of this adventure. They find themselves in an abandoned amusement park deep below sea level where they are forced into playing a gruelling 'Game of Fate'. This first scenario is a misleading introduction, because World's End Club is no game of life and death but a journey about young people who have to overcome challenges in a strange environment.

Whether it is the world building, looking back into the past or uncovering the central plot points, this story succeeds in surprising us again and again. World's End Club splits into two parallel narratives that converge at certain points in the story. The plot is designed to be viewed from both sides and therefore the game progression is relatively linear. The narrative expertise of the authors is quite noticeable, but unfortunately that's not the only thing that carries over from their past work at Spike Chunsoft.

Kodaka and Uchikoshi have enough storytelling experience with visual novels so that you won't know what's coming next. However, between putting together carefully scattered story snippets, we are regularly thrown into very clumsy 2D platformer missions with shallow puzzles and boss fights that add little to the game. As said, in World's End Club we play a bunch of children, who one after another develop special superpowers. One can throw heavy objects, another one breathes fire, and someone else reverses gravity so that we either walk on the floor or the ceiling. Each of these individual skills has a very limited use and that's why the gameplay is built around one or two obstacles at a time.

Most likely these missions are supposed to be a variation to the narrative chunks, but because they are so frustrating they take a lot of pace out of the story. The platforming passages are saturated with forced restarts as any obstacle kills us in an instant. Missing indicators turn what are very simple challenges into unfair death traps, but luckily the auto-save system is very generous, so deaths (and occasional crashes, which the Nintendo Switch version suffers from, too) never set us back too far.

Ultimately, World's End Club is neither very fun to play nor particularly creative in its game design. Puzzles and platforming are very raw and the best thing about them is that they don't drag on unnecessarily. The narrative has its fair share of moments because it manages to develop a stirring group dynamic that binds all these children together. Of course, there are also a few surprises that take the game to a meta level and thus create a link with earlier works of the Japanese developers. But this time, Too Kyo Games doesn't succeed in what they want to achieve. For the most parts, World's End Club is telling its story too hastily, with poor or rushed explanations and an attitude, which often drifts into being silly. The fact that this journey will be quickly forgotten is probably the biggest disappointment, since it's usually this very reverberation where these developers shine the most.

Gamereactor UK
+
Lots of colourful characters, unpredictable story, soundtrack is catchy.
-
Technically unclean, gameplay cannot contribute to the story, you will quickly forget it.
is our network score. What's yours? The network score is the average of every country's score

A look ahead to Death March Club with Kazutaka Kodaka

It's the death game "no one has seen" yet.

From Kazutaka Kodaka and Kotaro Uchikoshi's Too Kyo Games. 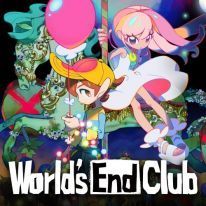