At the very beginning, World of Warcraft was extraordinary. The mythology that bound the world together and the charisma of the characters populating Azeroth had been developed and nurtured over a quarter of a century, since the original Warcraft RTS was released. The first two updates expanded the experience, and despite the increasing weaknesses evident in some parts of Wrath of the Lich King, we turned the blind eye for one reason: Arthas was there.

Maybe that's the reason why Warlords of Draenor looks so good to us, because it wasn't the third expansion. Let's face it, Cataclysm and Mists of Pandaria weren't either revolutionary or particularly brilliant. Pandaria rescued the situation before the end, focusing again on the Alliance-Horde conflict, bringing back the epic scale of the series and demonstrating the qualities of this fantasy world.

And here we are again. Another expansion. Crossing the Dark Portal to another period, this time to an era before Draenor was ravaged by war and the Burning Crusade of Sargeras. Comparing both titles, if Cataclysm managed to redefine the old content, updating it, Warlords of Draenor does likewise with Outland, showing us how this world was before its aforementioned destruction.

If you're not familiar with this world and its history, you won't be so amazed. But if you were one of those that spent months wandering through Outland, studying the landscape and watching the population, you're about to have some fun. If, like us, you're keen on the Alliance, walking and questing through Shadowmoon Valley (the starting area) will be a pleasure. It's hard to think that this paradise, full of gorgeous forests and always basking in moonlight, will be, in a few years, a volcanic and cursed wasteland, flooded with demons and voidwalkers. If you're one of those players that felt shivers down their spine when first entering the Black Temple, you'll be excited to see the Temple of Karabor and its harbor, resplendent with its magnificent architecture.

In Warlords of Draenor, Blizzard has played with the memories of players, especially those who have been fans for the long haul. One of the headline features of this expansion, the Garrison (a fortress that we have to expand and customise with unique buildings and staff), is an obvious wink back to Warcraft. The comparison comes easily: you have to chop down trees or find resources in the mine, while ordering your followers to complete quests and construct buildings that improve your items (or craft new equipment)... Furthermore, there are also outposts in each area that you need to build right at the start. Once constructed you'll have to choose between buildings in order to get the resultant advantages. Having your own Talbuk in the new Nagrand, one where you can fight, fish and farm materials, is worth its weight in gold, especially when you discover that, in this particular expansion, there are no flying mounts and you have to make your way by foot (for now).

Removing the possibility of flying away whenever the player wants has had a direct impact in the PvP. In this expansion you can't get away that easily and you have to use the official flying posts, thus causing a loss of mobility. Nevertheless, Blizzard has improved the feeling of exploration. Now that all players are on the ground they're easy and visible targets, so we are back to seeing confrontations between factions taking place in the middle of nowhere. Still, if you're looking for a battlefield you can always go to the island of Ashran, a whole area where you can fight and get resources as you want.

In terms of narrative we can clearly see the leap in quality from Pandaria to Warlords of Draenor. Each area has its own storyline and dungeons. However, the epic part of this expansion kicks off early, when we talk to the archmage Khadgar in front of the Dark Portal and we cross with him, shoulder to shoulder with the greatest heroes from both factions. In World of Warcraft we are not working class heroes anymore, we are dignitaries, and Warlords of Draenor reminds us of this with every step we take.

We are not soldiers, but the commanders-in-chief of the invasion, and we aren't going to simply watch the action anymore. Instead, we will create the plans to vanquish Garrush Hellscream and his followers, fighting famous people such as Gul'dan or Ner'zhul (who would later become The Lich King, seducing Arthas, and joining him in this entity). Missions in each area allow us to perform heroic deeds, assault towns, set up sieges or engage in epic confrontations. There's plenty to do.

Once again Blizzard has shown us how capable they are when building great narratives, and they do so using cutscenes made using the in-game engine, a long way from their superlative cinematics. Here you can see the new facial models of the characters, now capable of showing emotions, and you will witness exciting, even breathtaking moments. On top of that the original soundtrack also builds up the intensity, mixing instrumentals with epic choral sections that remind us of some of the classic themes from the franchise. It's a masterful soundtrack that perfectly captures the atmosphere and changes dynamically depending on your situation.

Another thing that you can clearly see when playing Warlords of Draenor is that Blizzard has put a lot of effort into maintaining control over the many in-game elements. They don't want people uncontrollably hoarding resources and selling them in the auction house. They don't want players equipping epic objects of level 640 at the start so they can push through the experience too easily. They know that it won't take long for some people to rise up through the ranks, and we're all aware that in World of Warcraft, true progression comes when you reach the level cap, via the heroic dungeons and items.

In this expansion all the resources are linked to the player, the professions depend directly on the instructors and on the tasks we carry out in our Garrison, and players can't gather recipes and materials, because access is quite restricted. We had to wait a whole week before we could gather the 100 truesteel ingots needed to craft our first epic item. Still, we couldn't do this unless we reached level 100, found all the equipment to try the heroic dungeons, even getting to the bottom of some of them. By setting a steady pace in Warlords of Draenor, Blizzard makes sure that players follow a logical progression from the beginning of the game.

Quests are linear and follow a clear storyline. They also depend on where we are and usually finish with an epic event. However, there's a lot of content that can't be immediately located and, as Warlords of Draenor invites exploration, you will find these missions scattered throughout the world. Likewise, the map is full of weird enemies, powerful weapons, possible allies, or even just fun distractions. Furthermore, if we add to that list the treasures that we can track down thanks to the archeology maps, we have the perfect excuse to traipse all over Draenor, doing more than just killing monsters and equipping better gear. Exploration is now more fun, because we're unravelling the unknown. It's a great and much needed dash of adventure in a game where, lately, everyone has been paying more attention to the equipment.

Nevertheless, sooner or later you will have to venture into the dungeons and prepare for the guilds. There are eight dungeons to complete, of all kinds and with different atmospheres, from dark orc-plagued environments to forests filled with living trees. There's also a fast train where you'll have to fight your through, carriage by carriage, killing enemies and trying not to get killed. Still, the difficulty level is a little low in the dungeons, mainly because the enemies are quite easy to kill, with only the bosses being hard nuts to crack.

That said, normal enemies in the dungeon require more mobility, and you'll need to pay more attention to what's happening, and better anticipate what's going to happen. Warlords of Draenor is not so much about reactions, but more about predictions, and once you've assimilated the mechanics the difficulty level is reduced somewhat.

To sum up, Warlords of Draenor has ushered in the second golden era of World of Warcraft. Gone are the days of mediocrity, and we are finally entering the post-panda age. It seems that both Diablo III and World of Warcraft have returned to their prime, and at around the same time that Blizzard cancelled its Titan MMO (hmmm, a connection perhaps?). The results are magnificent across the board. Warlords of Draenor is a funny and exciting expansion, well-crafted and full of new content. We're positive that you'll enjoy it. It's a great game and the expansion that all WoW fans have wanted for so long, and it lays the foundations for a bright future for the franchise.

Advertisements
Gamereactor UK
+
+ Varied areas, beautiful music, an epic and exciting narrative, funny, the Garrison is a great addition.
-
- Dungeons are too simple, they have mainly lost the factions, more control but player progression is still a little too fast.
is our network score. What's yours? The network score is the average of every country's score

"It's the expansion that all WoW fans have wanted for so long, and it lays the foundations for a bright future for the franchise."

Tapping your feet to the beat of Azeroth.

World of Warcraft is being turned into a children's book

Blizzard unveils some new plans for the fantasy IP.

WoW subs at a nine-year low

1.5 million lost since March of this year.

Check out the finished posters for the Warcraft movie

We're starting to feel the hype.

Blizzard invites players to return for seven days free of charge with launch of Fury of Hellfire patch.

Time's ticking for players to reserve their names.

Online
Cruxis Edited on the 24th of November 2014 at 16:24.
Flying mounts was one of the most horrible things Blizzard ever implemented to their game. Glad to see they've finally seemed to realise that to some extent.

But my WoW days are over regardless, so it won't matter to me. But I'm happy for the sake of the people still playing it. 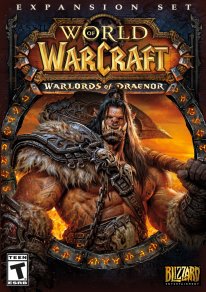