A new mobile game called World of Demons has been unveiled by the highly respected Japanese developer Platinum Games. The game is scheduled to hit iOS (iPhone and iPad) this summer it'll be a freemium title. An Android version is planned for release later this year. Platinum Games is partnering with established mobile publisher DeNA to "bring the authentic action game experience you've come to expect from us to your mobile devices".

The game is set in the world of Japanese folklore and could very well be regarded as some kind of spiritual successor to Okami (a game developed by several key Platinum figures prior to Platinum Games being set up), mainly due to the visual style. World of Demons pits samurais against spirits, or Yokai, a popular theme in Japanese folklore. More specifically against corrupted Yokai, and you'll also collect Yokai to fight on your side. The visual style is inspired by traditional Japanese ink painting and woodblock prints, an art style that's very easy to look at.

Gameplay-wise we note reactive dodging and parrying as well as sword-based combo attacks and exciting finishing moves - much like what you'd expect to see from Platinum Games. Controls are built from the ground up for touchscreen devices.

Are you interested in World of Demons and is this the kind of game you see yourself playing on your phone? 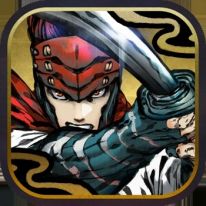