For those not in the know, a bit of brief background.

2048 was one of two potential titles recently linked to Sony's popular anti-grav racing series. In theory '2048' sounded more better than 'Trinty', if mostly due to the links it immediately made with 2097, the iconic subtitle for what's considered the finest entry into the franchise.

Speculation drove discussion, that with developer Studio Liverpool having already explored the far-flung future of the world's greatest sport not on two wheels with Pure, HD and Fury, a historical backtrack had potential. And from a pure design point of view, seeing the Wipeout team's artistic interpretation of near-future was too good a image to leave alone.

All speculation anyway. But as it turns out, that's exactly what Studio Liverpool did.

It's not a reboot, but an exploration of what the origins of the Anti-Grav League and its first few race seasons would have looked like, against the backdrop of a city building its future glowing skyline on the remains of its industrial past. New emerging from old, a crossover witnessed in the trackside architecture in every race.

The game's presence as part of Sony's top secret pre-E3 showcase might seem minimal at first glance - a single race track, in both single player and multiplayer through cross-platform play - but for a franchise whose legacy stretches back sixteen years come this September, there's plenty of changes to notice. Such as the craft design.

Far from the sleek missiles of the sport's future, these machines designed in its early years are the closest thing Wipeout will ever get to the adjective "ugly". Their curves are less pronounced - think mack truck rather than Ferrari - but there's a sexy retro-finish to the shape thanks to a clear association to the ships seen in the very first game back in 1995, even if 2048's are even more chunky than their near-future versions.

While Studio Liverpool went back to the original game to figure how to retro-engineer both the teams and the Anti-Grav League when they were just taking off, the track creation and visuals clearly show the evolution from the Wipeout series this side of the millennium line. The Tower Track, as it's been codenamed for the duration of development so far, sweeps through the newer and older areas of the city in which this season takes place, and shows the evolving cityscape in fantastic, eye-catching detail.

If you can pull your eyes away from the track, you'll notice how the opening few lengths of the race sweep along cordoned-off city streets crammed with people and branch off with multiple routes through freeways. Colours are muted, dirty even, to suggest at a glance the decay we'd expect of any future world taking 80s sci-fi as its template (but a first for Wipeout).

But then the centrepiece of the course comes into view suddenly. A near ninety-degree turn upwards and along the length of the tower that dominates the track, before the straight line turns into lazy loops around its circumference. Blue skies serve as rich background to a gleaming new world of bright skyscrapers and glowing racetracks. The transfer is about as subtle as a brick, and all the better for it.

It's the intention of the developer to have one centre piece, or central hook, on which to hang each track from, in order to give each course its own unique identity. The tracks are noticeably wider, a conscious decision to allow for more aggressive play, letting ships jostle for position. The studio has been tinkering with the combat system, splitting weapons pick-ups into two distinct grid colours to indicate aggressive and defensive options, while the Shield has been incorporated as part of each ship's arsenal from the start, flicked on with an energy-zapping tap of the circle button.

The game offers both normal and gyro-sensor options for steering, the ability to shift the floating craft's front and back to counter drops or rises feeling a natural addition to the handheld's tilt-sensing tech.

We did try out cross-platform play, though the nuts and bolts mechanics of the setup weren't allowed to be discussed, despite our best interview efforts. (Questioning: "Can you tell us about it?" Conspiratorial: "Go on, tell us about it." Pleading: "Why won't you tell us about it?") File that then under the "all to be revealed later" section closer to the console's launch.

And, as a relatively small but fun addition, stroking the rear Touch Pad allows you to manipulate the title and menu screens' backgrounds. Something, we're told in a whisper by the studio, that might have greater implications than a simple visual pleasantry.

Given Designer's Republic influential work to the series in the past (Wipeout 3 being a marvel of minimal menu design) we obviously ask about whether that to is being retro-fitted into the equation, as we spy the classic Fesiar team logo billboarded along part of the course. Answers aren't forthcoming not due to secrecy but due to the fact that section of the team aren't present at today's hands-on.

We're eager to know more, to play more. And that, if anything, is a telling. One of only a handful of racing franchises with such legacy and that are still tearing up consoles today, Wipeout has continually delivered gorgeous graphics and addictive gameplay in every iteration. On this brief run through, 2048 promises to be no different.

"This is the best Wipeout for a long time, and the best introduction to the series a newcomer could wish for."

In a move that will come as a surprise to many, Sony has closed down Studio Liverpool, the team behind the futuristic racing series, Wipeout.

Feel the speed of the future! 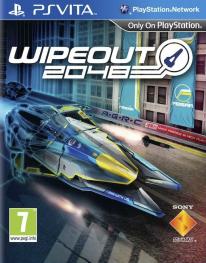