Due to set sail later this month, Windbound caught my eye for a number of reasons, but chief among them is the game's eye-catching visual design. Naturally, there are technical reasons why developers look to cel-shading and create worlds with this simple yet effective style, but it's also important to remember the impact that Breath of the Wild (and, looking back a bit further, Wind Waker) has had on the industry, and while there are plenty of differences between this and Nintendo's stunning open-world adventure, the visuals in Windbound felt reassuringly familiar.

The Zelda-with-boats comparisons end there, however, as Windbound is a very different kettle of fish when it comes to moment-to-moment gameplay and overall structure. There's a clear focus on exploration here, and heading out towards an unknown horizon is at the very heart of what 5 Lives Studios is trying to achieve in this follow-up to Satellite Reign (a very different game and certainly not an indication of what the studio would get up to for this, its second major project).

At its core, Windbound is a survival game with crafting elements. That means grabbing resources as you explore, and then navigating menus in order to craft the items that you need to advance. The opening of the game sees you stranded on a small island and tasked with gathering the items you need to build your first boat and set sail. I went about my business, exploring the islands and finding the resources required, and once I had the necessary supplies I waded into the water and built my first paddle boat.

Boatbuilding is a big part of Windbound. The experience is formed around roguelite mechanics, which means you're exploring a procedurally-generated archipelago filled with unique islands. That being the case, your boat becomes your home on the waves, and you can add sails, storage, and more. Some of the designs looked quite fun, and those who enjoy crafting and building bases will likely get a thrill out of not only creating their bespoke base of operations but then being able to take it with them on their travels.

The setup isn't as harsh as a traditional roguelike as you persist in the same open-world environment if/when you die. When it happened to me, I respawned on a different beach and went about building a new boat straight away, and once that was done, I was back on the waves and looking for the next tower. Speaking of which, the game's mysterious towers are made up of interlocking geometric columns like you might have seen in the Devil's Causeway; they erupt out of the horizon in the distance and each one is a point of interest. Progress through the levels seems linked to climbing these mysterious towers and activating strange terminals.

In fact, the whole story surrounding Windbound is fairly enigmatic and I can't claim to have a good handle on what was going on. Why are we alone in this archipelago? What are we working towards? What are these mysterious towers and who put them there? If nothing else, I'm intrigued and want to know more.

And it's that spirit of adventure and the need to know what's just over the horizon that will drive exploration in Windbound. Much of this is done on your boat, but harnessing the wind was a bit tricky to master. It seems somewhat inspired by the brilliant sailing in Sea of Thieves, and there's a similar system here as you can track the direction of the wind by following wind-trials in the air, but the water mechanics and sailing mechanics don't quite compare to those in SoT (hardly surprising considering the differences between the two studios and their respective budgets).

I played through most of the opening level and then part of Chapter 4. During that time I crafted boats, fought the local wildlife, eat a bunch of berries, climbed some towers, and sailed between a number of islands. There's potential here, but realising it depends entirely on the procedural generation of the world and whether or not it's going to be an interesting place to explore. The nuts and bolts of the game seem functional but not overly polished, so the story will need to sweep us up and drive our adventuring. The good news is the art style is lovely and the world is atmospheric and intriguing. We'll find out if that's enough to drive us forward to new horizons later this month when Windbound lands on PC, PS4, Switch, and Xbox One.

Watch the highlights of our recent hands-on with Windbound

Check out around 10 minutes of gameplay. 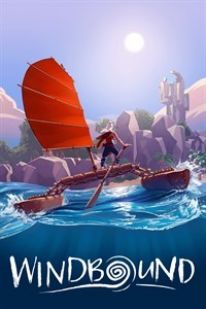