Runner3 didn't come from nowhere. There is a fascinating past about how a small studio, Gaijin Games (today Choice Provisions) found its path in the almost inexistent Wii indie scene with a perfect combination of bit rhythms, pixel graphics and arcade gameplay: Six little games created and released one by one that came to be Bit.Trip.Complete.

And one by one, all of them are coming to the Nintendo eShop. QubicGames just announced that Bit.Trip Beat, Core, Void, Runner, Fate, and Flux will be on Nintendo Switch on December 25th, 2020 for £4.49 each. Exactly as they were back in the day, without any update. They are all featured for new and old audiences in a Direct-like video produced by the small publisher.

At the same time, QubicGames introduced the Nintendo Switch version of Door Kickers, a top-down, action-strategy game where players take control of a SWAT squad in intense and dangerous situations. It's coming to Switch on December 26th, 2020 for €11.99.

And the very same day, but a little bit more expensive (€13.99), DungeonTop is hitting the eShop. Developer One Up Plus Entertainment is behind this rogue-like deck-building game with tabletop battles and medieval fantasy environments.

Six-game collection for Wii and 3DS.

"The direction will surprise many." 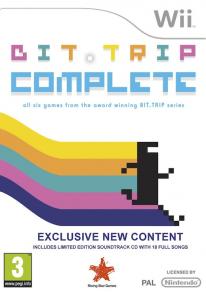