Casually extravagant. That's how I would describe the intro sequence to Wii Sports Resort, the sequel to the phenomenon that is the best selling console game of all times (bundled copies included). Your Mii climbs up from his seat in the plane, adjusts his parachute, and joins dozens of other jumpers in the air. Twist your Wiimote ever so lightly towards the others and join hands in celebration as you descend on Wuhu Island.

But sky diving isn't the first thing you get to see of Wii Sports Resort. The game actually opens up with a three minute clip on how to make best use of the new Wii Motion Plus peripheral and to avoid any costly accidents (strap on!). To save you some time here is my instructions on how to use Wii Motion Plus - put the thing in the other thing. Done.

Wii Sports Resort is a more complete game than its predecessor that despite its success could be seen as more of a tech demo showcasing the new console. Instead of a meagre five events (Wii Sports) you are now treated to twelve events, and almost all of these come in three different variations. The fact that all the events take place on the same island, where the bowling alley is a stone throw from the pier where the wakeboard event starts, ties everything together nicely. We still pick the events from a menu, and there is no way to wander around freely, but the airplane and cycling events give us some degree of exploration.

The first event I took a liking to was archery. If you are right handed you keep the Wiimote in your left hand while you pull back your right hand holding the nunchuk as if you were pulling back the string. The arrows are forcefully driven into the target with a convincing vibration. This is perhaps the event most true to its real life counterpart in all of Wii Sports Resort. Another layer of difficulty (and fun) is added when the targets are moving (you still have to compensate for the wind direction, naturally). The last level takes place inside a vulcano, and my thoughts drift away to what the next Legend of Zelda might look like. While archery may not be as easily accessible as other events it is all the more rewarding.

Frisbee is also entertaining, and this is the first event where I really notice the difference WIi Motion Plus makes. As my Mii picks the disc out of the mouth of a cute little dog, the movements I make are smoothly mimicked on screen. The event requires the same technique as the real sport, and timing the release is just as important as in real life. With a bit of training you will get the perfect wrist action in all three Frisbee events.

That precision is also present in basketball. As the first round of free throws is over I get a feeling that this is going to be a popular event at upcoming parties. The first variation of basketball sees your Mii moving from station to station trying to register as many baskets as possible within the time limit. Flicking your wrist at the exact right time is almost as challenging as making hoops on the court. In the beginning most shots were hitting the rim, while I murmured something about white Miis who can't jump, but eventually my Mii turned into a slightly cartoony white Kobe Bryant.

A few rounds of table tennis also manages to keep me relatively happy. In this event we only control the paddle, not the player, a wise choice. The controls are responsive, you are able to put spin on the ball, and the pace will force you to focus hard. Unlike Rockstar's Table Tennis, where you could wave the controller like some kind of waving mad man and still manage okay, this event lets you feel the difference of backhand and forehand strokes. If only doubles had been included it would have been even better.

Two returning sports are golf, with more holes to master, and my personal party favourite bowling. A few new game modes have been added such as the 100 pin game, and lanes where your ability to control the spin is put to the test. The leap from the Wii Sports edition is not tremendous, and the only thing I really noticed was that it was easier to put spin on the ball. This is something that is true for all of Wii Sports Resort, it is more a refinement than a revolution. And I guess I was expecting the latter.

Fencing is an event with a mix of both fun elements and boring ones. I enjoy slicing giant slices of white bread in two, and the event where you try and slice as many bizarres objects is fast and enjoyable. But when I face an opponent I get one of those pugil sticks we know from American Gladiators. I recall the boxing from the first Wii Sports, and it feels like more pointless wand waving.

And that piece of criticism takes us to the fillers. Because unfortunately there are events that just don't measure up to those above. Four events fail to entertain, and I really don't feel like I'm going to play them ever again. Canoeing is one of these, your Wiimote is a paddle, use it to propel yourself forward, but the event is sluggish and no fun with friends. Wakeboarding is a bit better as it has some sense of speed and nice water effects, but traditional controls such as in Surf's Up would have worked better.

Cycling is another victim of the same disease. While it is charming to pedal through the sunny parts of Wuhu Island it is more sight seeing than an actual competition. There are some finesse involved like slipstreaming behind another cyclist, and a stamina bar that sinks if you push yourself too hard. But cycling is all about your legs and as you flail your arms up and down it feels more like milking a cow than ascending L'Alpe d'Huez. I'm not a fan of power cruising either.

Some great events, some poor. You don't really need to know much more about Wii Sports Resort than that. Wii Motion Plus is not going to shock you, but it does provide better precision and more possibilities (the only problem is that you need more of them if you plan to play with your friends). While some events are superfluous, they are all filled with the special Nintendo charm. And it is a charming game easy going game, and there are prestigious event that you are going to hate losing out to your friends in. Best of both worlds, casual and extravagant.

Gamereactor UK
+
Numerous entertaining events, nice graphics, charming design, excellent party game
-
Some bland events, controls can be over complicated
is our network score. What's yours? The network score is the average of every country's score

Jonas Elfving has taken a trip to Nintendo's island paradise. Twelve sports to conquer and a new piece of plastic for your Wiimote...

One million in each region 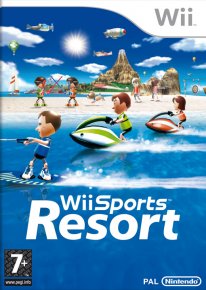