All the typical signs that White Knight Chronicles is nothing more than a standard Japanese roleplaying game are there. A 17-year old annoying kid with a slick haircut lives a completely normal life until his path crosses that of a princess, at the same time as the forces of evil attack. It won't take long until the kid has to join up with a bunch of other teenagers and an old man (like really old, like 45!) to rescue said princess. Have we seen it before?

Yes, we have, but hang on...who is that guy in the background? He wasn't in the manual. Not surprisingly, since what makes White Knight Chronicles different is that you create one of the characters yourself. He or she will then tag along through the entire game and help the rest of the crew out, even if it's the annoying Leonard who is the main protagonist. The character editor is just as powerful as the one in Oblivion, but anime-styled, and allows you to create whatever kind of hero you'd like. We're talking tons of eyes, heads, hairstyles, bodies and attitudes that you can tweak even further. I really appreciate the ability to actually see the length and weight of your character, since it's way too easy to just put it together without any form of reference and end up playing 30 hours as a dwarf.

The point of your own character is not only to get a more personal touch in the adventure. He or she mostly hangs out in the background anyway and seems to be there most of the time to remind you that the fancy cinematics are done in realtime. No, pretty soon you get the chance to play certain missions online. This is not a full-blown MMO, instead it's more like Guild Wars, Phantasy Star Online or Monster Hunter. You go to a town, select your missions and can then team up with three friends to fight against bosses. Since the Japanese launch more than a year ago, plenty of extra missions have been introduced, but how many we will get in the future remains to be seen. Either way, it adds a lot of extra content. You also get to shape your own town, a remnant from the studio's old game Dark Chronicle, and you can invite people there to just hang out.

It's not that a big surprise that White Knight Chronicles to a great extent is a online roleplaying game, the strange thing is more that it didn't happen sooner. Five-sex years ago, Level 5 worked on a MMO for Xbox, True Fantasy Live Online. It looked incredibly ambitious, but for some reason Microsoft and Level 5 decided to part ways and the game was cancelled. And sure, you can sense that they still have wanted to create a "real" MMO, but since this kind of limited grouping similar to the games mentioned earlier has become so popular the choice was probably easy to make.

As a single player game, White Knight Chronicles isn't as hot. The combat system is more or less like in a MMO, where you can't pause the game. You need to plan ahead in a safe spot and then combine the proper attacks against the various enemies. If everything goes wrong you can always call on an enormous white knight that shows up and slices whatever troll, boar or assorted monster you might be fighting into tiny little pieces. The AI characters are pretty good at keeping you healed up and the game can hardly be accused of being especially hard.

On the other hand, there are lots of way to optimize your play through good planning. You can't teach everyone in your party all the different combat techniques available, so you have to put together a good team on your own. The techniques can then be combined into combinations that you get to name on your own. I really enjoyed seeing my old MMO-character reborn in White Knight Chronicles, brandishing a gigantic sword and doing a four strike arial combo I named "The Dragon Spanker".

If you like crafting in MMOs you'll probably like the gathering of materials in White Knight Chronicles too, materials dropped either from monsters or from cutting down trees or bashing up rocks. These materials can then be put together to make new weapons or upgrade the ones you currently own. It should also be noted that, just like in a MMO, every new piece of equipment actually shows on your characters compared to games like Final Fantasy where you never get to see any particular difference no matter how great gear you pick up.

White Knight Chronicles was one of the first roleplaying games revealed for the Playstation 3, and it has certainly taken its time to reach us. What felt like a really pretty game back then has grown much older with games like Tales of Vesperia and Final Fantasy XIII setting a more modern standard. The game feels like a better looking, high definition version of the studio's games from the last generation; Dark Chronicle, Dragon Quest VIII and Rogue Galaxy. Of course it's important to know who is hitting what and for how much damage, but having the combat text cover half of the screen is a bit odd. In general, the graphics and the presentation feel old fashioned.

The voice acting isn't very good either, but that is pretty much standard for the genre. Perhaps we should be happy that Nolan North didn't do a leading part in another game (for once), but we could very much do with more actors like him. The music on the other hand is really good and the wonderful "The Travelers" was one of the primary reasons why I looked forward to this game already back in 2007.

This wasn't really the epic masterpiece that I have been looking forward to for the last three years, but the online mode is an exciting twist that makes this game last much longer than other games in the same genre. It's not nearly as pretty as Final Fantasy XIII, but it does have a fun combat system and addictive gathering that makes me cut up legions of monsters to get even stronger weapons. The ability to turn into a giant knight makes me think of the good old game Xenogears, and it's a good thing that the game manages to stay balanced despite it. That we also get to create our own character to dethrone the game's standardized dork Leonard is a bonus indeed.

Mikael has played this Japanese roleplaying epic that breaks a few traditions - both online and offline.

New screens to be had... 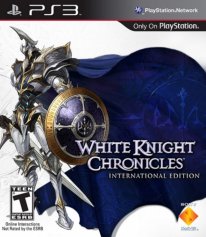