To some, golf can seem a little boring. The sport, which requires delicate etiquette and zealous focus, doesn't excite a lot of people, however, Triband thinks they've found the magic formula when it comes to keeping attention, and this comes in the form of What The Golf?

Designed as a bizarre and outright silly physics-based golf parody, What The Golf? takes all the best parts of the sport and puts it into a blender of erratic madness. One of the best ways to describe how this title plays is to think outside the box and accept whatever seems logical is probably the exact opposite of what's going to happen. If the shot seems simple - a short hit requiring minimal strength for example - then the chances are it won't be the ball you're hitting.

Unlike some of the other golf titles out there, such as Golf With Your Friends, What The Golf? doesn't bring the same linear experience. To play, controls are as simple as clicking and dragging to specify power, whilst simultaneously aiming toward the place you'd like the ball/object to land. The challenge of the game arises when you have to take the unusual shapes and mechanics of each scenario into the equation, elevating this simple golfing title into a whole different beast.

To get the gist of what we mean, it's worth clarifying that What The Golf? is more of a mash-up of golf-related mini-games, rather than a golf game in its purest form. For example, the story mode starts with some simple, normal shots, before making you question everything when you're required to 'golf' an in-game avatar at the hole, taking into account some unusual ragdoll mechanics. Scenarios similar to this come up all the time through the title, from shooting the power arrow, all the way to belting cows across the world.

The part that's really unique about What The Golf?, however, are the times when the level doesn't require you to golf at all, bringing a completely new mini-game into play instead. One of our favourites was a level that tricked us into thinking it was just a normal shot, only to find out we'd be guiding a rocket-powered football to the hole instead, which explodes when colliding with anything. In fact, the levels introducing new mechanics and features such as this made us understand exactly how the title managed to get its name.

Another part of What The Golf? that never ceased to entertain us was the countless nods to game culture through fun mini-game levels. During the time we spent playing the title we came across a Flappy Bird level, a Super Mario Bros. level, and our personal favourite, a level based on the original Donkey Kong arcade game. Each of these examples featured mechanics almost identical to their respective titles, such as having to maintain a specific height to pass through gaps in the Flappy Bird mini-game.

Aside from just playing unusual mini-games, each set-in a different level, What The Golf? is split into two main modes, the story and daily challenges. The story mode is where the majority of the experience exists, branching across a medium length journey with a narrative as wacky as the game itself. It starts in a laboratory where a computer system guides you around, tasking you with completing levels to unlock further areas. The unusual part comes when the computer starts to have an emotional meltdown after you complete too many levels, ultimately resulting in its self-destruction. Throughout this part of the story, you can effectively free roam around the overworld, with the opportunity to goof around with the many objects in the sandbox, such as explosive barrels or cars.

The other main mode is the daily challenge, which presents a set of levels for you to progress through in as few shots as possible, all for the opportunity to mark yourself on a leaderboard, showcasing your prowess in the upstanding and not-at-all ridiculous game of What The Golf? Since these are daily challenges, each 24-hour rotation sees a new level for you to take a crack at.

To round everything out, we have to mention the absolutely fabulous soundtrack What The Golf? uses. Not only does the title deploy a relaxing, yet upbeat tone, but it is accompanied with the occasional bit of melodic, acapella-esque singing. In fact, when we were playing and the singing kicks in, it almost felt as though we had a barbershop quartet standing behind us, accompanying each shot or level with their melodic and charming tone.

All in all, What The Golf? is a fun golfing title that provides an enjoyable experience for anyone, even those who find the traditional sport itself as exciting as watching paint dry. The countless unique mini-games and cheery soundtrack make playing the game a delight, and it's just a shame it isn't longer because right now, we aren't sure we can look at golf in the same light again.

Gamereactor UK
+
Daft, exciting and fun title above all else which would struggle not to put a smile on your face.
-
Between the relatively short story mode and daily challenges, the length of the title cuts the fun short.
is our network score. What's yours? The network score is the average of every country's score

What the Golf is rolling to Steam later this month

The wacky "not golf" game will also be revealing a "very secret feature" soon.

What the Golf? is landing on Switch next week

The "golf game for people who hate golf", What The Golf, is heading to Nintendo's hybrid console.

What The Golf? is now available on Apple Arcade

The delightfully unique golf game 'What The Golf?' is now available on all iOS devices, with a PC release following in October.

What The Golf? aiming to "end all golf games"

We talked to Lasse Astrup and Peter Bruun at GDC to hear about why they're putting this unique twist on the sport of golf.

What the Golf? reaches funding goal on Fig 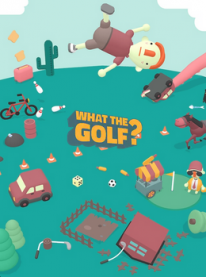