Yakuza: Like a Dragon launches next week for audiences in the West and is arriving as a launch title for the Xbox Series. This new entry shakes up the combat system completely and plays like a classic JRPG with turn-based attacks and special abilities you can unleash on foes. It's a fun game, and we ended up scoring an 8/10 in our review, praising its bold change in direction.

On today's stream we will be playing through the first two hours on the Xbox Series X. Yes, you heard that right, this will be the first time we will be streaming on Microsoft's new machine. To catch the action, tune into our GR Live homepage at 3pm GMT / 4pm CET.

The added content is being introduced as a downloadable DLC, accessible from Kazuga's smartphone.

Meet the English cast behind Yakuza: Like a Dragon

Sega has released a video showing the English cast, and it includes Star Trek's George Takei.

Here's the absolutely crazy Yakuza: Like a Dragon launch trailer

It's easily our favorite trailer from the Xbox Series launching line-up.

We're playing Yakuza: Like a Dragon on today's GR Live

Today we will be playing through the first two hours of the seventh core entry in the Yakuza series. 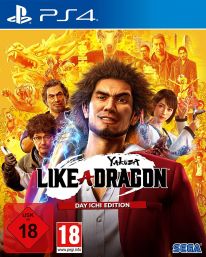