February is certainly going out with a bang for indie fans. Just this week we have already seen the release of Taxi Chaos, Rogue Heroes: Ruins of Tasos, and Curse of the Dead Gods. The latter of this bunch of games is an action roguelike in the vein of Hades that sees players fight their way through many trap-filled dungeons in search of untold riches.

The former Early Access game is going to be the focus of our stream today, and we are going to see just how far we can venture before death inevitably catches us up. Be sure to join Ben in his fight for survival over on our GR Live homepage, starting from 3pm GMT / 4pm CET. In the meantime though, you can read our review of the game here.

The roguelike made its way out of Early Access earlier this week.

Curse of the Dead Gods set for Xbox One, PS4 and Nintendo Switch release on February 23

The indie roguelite is looking to a full release, following a while in early access.

In Passtech's new roguelike you really will get killed in the hunt for fortune and glory. 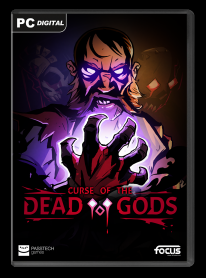