Stealth has become an increasingly nuanced part of modern games. Thief, Tenchu: Stealth Assassin, Metal Gear Solid and Splinter Cell brought the mechanics of sneaking to the forefront of gaming over a decade ago.

Since then, stealth for stealth's sake has become less and less common. It's no longer enough on its own. Whilst games like Splinter Cell and Metal Gear Solid have retained elements of what made them so popular, they're no longer dictated by the mechanics they helped become mainstream.

Recently I've been playing lots of Sniper Elite V2 (I also spent some time with the original), and here stealth is an essential component. When recently talking with Rebellion's Steve Hart (senior producer on V2) he described the game to me as "long-range stealth". Those who have played the game will know that this is an apt description.

My personal favourite was the option to use ambient noises to mask the sound of gunfire. If timed well, a whole patrol can be taken out before the last realises the first is down. Cover comes in several forms; anti-aircraft guns, dropping bombs, and bells ringing in the distance. The trick is in the delivery, and like me, you'll probably screw it up a couple of times before hitting each and every mark.

There are plenty of other ways to conceal yourself in V2. Crawling around derelict buildings with your silenced pistol drawn is by far the most effective. It does help that the guards in some of the abandoned houses are very relaxed, often taking naps at the most inopportune moments.

Whilst it cant be denied the AI in Sniper Elite isn't the best, and close-quarters combat can be brutally unforgiving, it's still a genuine thrill to move through an area undetected, dispatching oblivious guards along the way.

Another major IP that has stealth close to its heart is Hitman. Absolution will be with us soon enough, and it promises to refine the popular fusion of sneaking and murder.

Hitman often has the audacity to hide you in plain sight. Want to get into that heavily fortified house full of federal agents? Ditch your gun and garrote the milkman. And don't feel guilty, you're a hitman dammit. Change into the milkman's garb and sneak in undetected.

Splinter Cell is another favourite of mine. Leading Sam Fisher through air ducts, up walls, and always away from the light, remains a highlight for me. There are few more satisfying moments than inching across a pipe on the ceiling, dropping down on top of a patrolling guard before dispatching his comrade with a double tap to the back of the head. These kind of set pieces, along with the gadgets associated with the series, became Sam Fisher's calling card.

Stealth makes for some sphincter-clenchingly tense moments. The thrill of pulling off an audacious stunt, executing the perfect sequence of head shots, the delight of slipping past a knuckle-headed guard as he meanders over to investigate the stone you threw in misdirection; these are the moments that define our experiences.

We might have moved past the stealth genre (if it ever really existed); its mechanics now found across a whole variety of different types of games. You can play it sneaky sneaky in Oblivion and Skyrim to great effect, creeping and crawling through dungeons and hitting attack bonuses as you go. Halo: Reach and Battlefield 3 reward a stealthy kill with assassination animations and tag stealing. Assassin's Creed merged parkour with stealth and the result proved unbelievably popular. Deus Ex offered us a variety of routes through levels, and one of these was always a stealthy option.

It seems that sneaking around is more popular than ever before, its absorption into the mainstream almost complete. Creeping in the shadows, waiting for the right moment to strike; for some of us, it's the only way to play.

Rebellion's long-range shooter takes us behind enemy lines during the fall of Nazi Germany.

Head back to Berlin, take Africa on the go, or even try your hand at virtual reality sniping with these spicy announcements.

Sniper Elite aims for Wii U

Console versions get maps and more.

505 Games and Rebellion have had to order in more champagne, Sniper Elite V2 was once again the bestselling game in the UK last week.

I love sneaking around. As far as I'm concerned, it's the only way to travel. 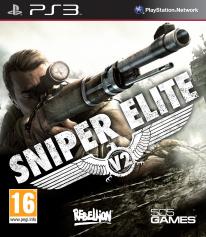