Not many games have ventured into the historical era of the French revolution, a turbulent period in French (and European) history that saw heads roll during a particularly violent uprising, but Polyslash's We. The Revolution is a game that's doing just that. Having just landed on consoles after a PC release, we've been experiencing the revolution on the Nintendo Switch, and it certainly packs a lot in.

Just like the period itself, We. The Revolution is incredibly bleak from the offset. You play as a judge with the power to quite literally decide life and death, and as we've come to expect from games, this leads to moral choices that affect the plot in major ways. If you choose to harshly punish a revolutionary this can put you in a bad place with the Revolutionaries faction, for example, and this, in turn, could lead to an attempt on your own life (think along the lines of Positech's Democracy 3).

At its core of We. The Revolution is about balance, then, and not only balance between the various factions that are warring in terms of the big picture, but also your family as well. When you go home each night you choose who you want to spend time with, and each decision will either positively or negatively influence your standing with your wife, father, and children. Each happy family member brings their own in-game benefits, but spending time with one will leave another sour, so it's all about making wise choices.

The bulk of the game is about being a judge and making decisions in the courtroom. There is a ton to take into account at first, rather unhelpfully thrown at you via very busy and cluttered menus and text-heavy tutorials, but once you get into the swing of things you realise that it's all about running through the case files, asking questions via a mini-game, and making a decision after you've taken all things into account. It's not a deep as it could have been (we're no Phoenix Wright here), but each case has its own unique caveats and considerations to take into account.

These cases often make you choose between your priorities. What if a clearly guilty man getting sent off for execution destroys your relationship with one faction beyond repair? What if the jury wants to see a man set free, but he's been proven guilty? What if a criminal admits their guilt, but their reasons for doing so were justifiable? These are all questions you should ask yourself, and you'll have to live with the consequences once you put your name on the dotted line.

As the game progresses we leave the courthouse more and more, and we're asked to design our own seal, give speeches at executions (where you need to make careful choices as to which way you sway the crowd), and even command battles. Some of these are rather random inclusions in this courtroom game that don't quite fit in some respects, but then again some work to raise the stakes, as the game is constantly reminding you that your decisions are shaping Paris and the course of history.

As for the content in these cases themselves, they vary from uncomfortable instances of sexual assault to vandalism, and it's interesting to see how the attitudes of the era influence the understanding of events. These cases don't exist in a bubble, and it's only by listening to the jury that you realise how these individuals fit into the tapestry of the revolution. A rapist isn't merely a rapist if they're a revolutionary hero, and that will colour the opinions of the jury and the people accordingly.

That said, the presentation of all these stories was a bit lacklustre. The voice acting is so good in the opening cinematic that we'd have loved to see that continue into the main game, but instead, we're just clicking through bland and boring text boxes and reading giant swathes when we get into the courtroom. Everything to do with the narrative and storytelling could have done with a bit more oomph, especially since it contrasts with the comic-like cutscenes that really do a good job of conveying the bleak world.

Despite the PC release earlier this year we also witnessed some bugs, like an options menu on the home screen that we couldn't back out of, and the pause menu refusing to work at all when we were in the game. It didn't totally ruin our experience, but these were big things in a console launch.

That said, the angular polygonal style the game wears so boldly is a great visual spectacle, and even though we're more used to associating it with the likes of Banjo-Kazooie than serious dramas, it's minimal enough to work within the greys and browns of Revolutionary Paris. There's not a whole lot of movement either, so it seems at times like you're wading through an old painting.

As a whole We. The Revolution is a bitter look into one of the most violent yet underrepresented periods in history. It's not perfect, but the courtroom drama and the deep story help create this immersive world where you're always at risk, and where the weight of the world is on your shoulders. There's a moral dilemma around every corner, and we're still left wondering what might have been if we'd chosen a different path through this take on history.

HQ
Gamereactor UK
+
Bleak and immersive world, Lots of story to take in, Moral dilemmas, Delicate balance to affairs.
-
Very busy on screen, Tutorials could have been clearer, Some of it becomes a slog, Dull text.
is our network score. What's yours? The network score is the average of every country's score

We. The Revolution lands on consoles next month

On June 25 we can experience Polyslash's story of the French Revolution, available for pre-order already on Switch. 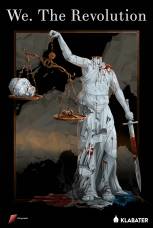