We Happy Few has had a long road to get to where it is now. After showing off its iconic art style, people were excited, but its launch into early access left people surprised and concerned at the prevalence of survival mechanics. After it was removed from early access, changed, and updated, we're now at the point where the game is fully released, realising the vision that Compulsion Games had all along.

What's more is that DLC has also started arriving for the game, with Roger and James showing up in the most recent content drop called They Came from Below. This gave Compulsion a chance to go down a different avenue with the game and explore a new direction, and we talked to narrative director Alex Epstein and art director Whitney Clayton about where the game has been, and where it's going.

"We thought the main game would be an urban roguelike with permadeath and learning by dying. We thought a playthrough would take 3-4 hours, and we'd get replayability through systems," they said when reflecting on the original concept. "Based on feedback from our players during Early Access, what we made was a fairly linear story with a collection of scripted encounters with crazy characters in a dysfunctional world. "

"Transitioning from one to the other was quite a challenge, and many of the imperfections of the game we released last August come from building one game on the base of a quite different game."

A key component of We Happy Few's identity ever since the early stages has been the Britishness of the world, clearly influenced by stereotypes and 1960s culture. This was created "by stealing liberally from the Beatles, Monty Python, The Pirates of Penzance, The Avengers, The Prisoner, Shakespeare, and A Clockwork Orange, among others," as we were told. "Also, yards and yards of reference photos, and a research trip that absolutely was not a family vacation."

We Happy Few's style may be a key component in its identity, but at the core of the experience are the characters that Compulsion has created, which have to be fleshed out by a convincing range of actors.

"The game has a hallucinatory visual style, but I think to make players really care, they have to feel that the characters are real. So we needed voice actors who convince you that they're really experiencing these fictional circumstances," they explained.

"We spend a lot of time casting, more I think than most studios. I started with 200 submissions for each role. I winnowed those down to about 15 actors I wanted to hear undirected auditions from. They sent in self-taped auditions based on a script. Then I did callbacks with maybe five actors per role. What I look for is emotional truth plus charisma. The first comes from training; the second comes from who knows where."

After We Happy Few established all of this and put it into practice with the full release last year, 2019 is the year to kick off the DLC plans with They Came From Below, giving the spotlight to Roger and James. These were a pair of side characters in the base game, but here they had their own story which gave a different take on the world.

"In the main game, we wanted to tell stories about three Downers (Wellies who have chosen to go off their happy pills) who were haunted by events in the past," we were told. "In the They Came From Below DLC, we thought it would be fun to take our two most hapless minor characters and make them the town's only hope for survival. From the main game we knew they're lovers and that James thinks he's the one who has to make everything happen, and considers Roger a scatterbrain that he's unfortunately in love with. So that suggested making it a love story; and by love story, I, of course, mean a story in which their expectations and attitudes are entirely at odds, to the point where they nearly sink their relationship."

"Originally we only knew that the story was "James and Roger vs. robots." The current political environment suggested a theme of "what horrible things are you willing to do to people if you consider them not human." Except of course the robots are not human, and maybe they really are as dangerous as James thinks. The best dramatic arguments don't have an easy answer."

With regards to the visual design, the style, and influences, They Came from Below is both similar and different to what came before. It takes what was there as a springboard to launch off of, leaning more into classic sci-fi, as Epstein and Clayton explained:

"Yes, we draw from many elements of iconic, 1960's Britain and retro-British science fiction like The Prisoner and the original Dr. Who. The juxtaposition between the crumbling, old-world architecture and sleek 1960's modernism was done intentionally to push symbolism that reflects the lore and background of our world. The way the world is stylized is intended to push the character and personality in both the human characters and the environment. We try to keep the designs and details realistic to add depth and believability. I guess the closest way of describing the game's style is "stylized realism."

This Dr Who influence shines brightest through the robots that are present within this DLC, retro in design and just as deadly. "Originally the pitch was "Red Peepers!" All the mechanical devices in Wellington Wells — Jubilators, Peepers, Headmistresses, and the Joy gates — are taken over by a rogue AI from another planet. There might have been strategic "take the map back!" gameplay where you take back neighbourhoods to get back resources to craft weapons to take back more neighbourhoods."

"It turns out our Peepers are a bit limited in where they can go, and only our humanoid AI's know how to deal with stairs. We wanted to give the players more than just the streets of Wellington Wells. And I think we wanted to make a sort of 1960s science fiction B movie. So we made robots and a giant underground lair."

It's not all about Roger and James though, as Dr Faraday also gets some love and care in this DLC. We won't spoil what happens in the base game, but this new story gives a fresh perspective on her and her character.

"There was a lot of love in the studio for Dr Faraday. We wanted to see more of her. She's snippy and feisty and beautifully voiced by Samantha Lee. Of course, loving a character doesn't mean protecting her from having horrible flaws!"

As for Roger and James, "we thought it would be hilarious if these two hapless, bickering lovers were the only hope Wellington Wells had to survive a robot apocalypse."

With They Came from Below out now for all to see, we couldn't resist asking where all of the DLCs will take us in the future, to which the pair said:

"Each DLC is vastly different from each other. After the main game, we split the team into three teams, each working on a different DLC. Since the DLCs are totally independent from the main story it allowed them to have a lot more creative freedom. We haven't announced anything about the next two DLCs but they will be wacky and will introduce yet again brand new mechanics."

With E3 just around the corner, maybe we'll hear more about what's been happening in Wellington Wells in due course?

"It may have been the art style and weird world that drew us in, but what kept us going was the narrative."

Compulsion Games' next title is "a new universe"

The We Happy Few developers are moving away from the game after concluding the final DLC, according to founder Guillame Provost.

The launch trailer for We Happy Few: We All Fall Down is here

The third and final expansion for Compulsion Games' title is here, showing us Wellington Wells at its lowest point.

With Roger and James getting the spotlight in the latest DLC, we talked with the studio about crafting the characters in the game.

We Happy Few's They Came From Below DLC on today's stream

James and Roger are back to battle robot invaders in the first batch of Season Pass content, and we're here to see what's new.

We Happy Few's They Came From Below DLC landing next week

James and Roger must locate the source of the robot invasion and find Dr. Faraday in an adventure that's included in the Season Pass.

Actually, there are three new ways to play Compulsion's game, with a trio of game modes dropping with the latest update. 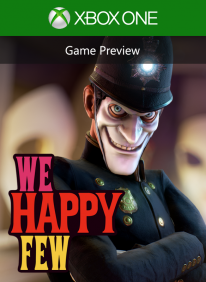