Toys for Bob and Activision's Spyro: Reignited Trilogy was released just yesterday, and since Gamereactor's own Sam was super excited for the release and even reviewed the game, he jumped on our livestream yesterday to show all three games off in their remade form.

If you missed the stream or just want to see it again, take a look at the replay down below, where we sample mid-game content from each, so that you can see a wide variety of levels in the two hours given.

Have you been playing the games?

"It brings the games into 2018 while keeping what made them so brilliant in the first place."

We play Spyro Reignited Trilogy on Switch for a few hours

Sam tried the second and third games on the livestream, showing us the new version on Nintendo's console.

We get stuck in once again, and it's none other than our superfan Sam playing the collection on Nintendo's console.

Our Spyro PC gameplay shows how good the Trilogy can look

The Reignited Trilogy has been released on PC following the PS4, Switch, and Xbox One versions.

Check out our Spyro Reignited Trilogy gameplay from Switch

The package releases on Nintendo's console tomorrow, and we've sampled all three games in the collection.

The remastered versions of the first three games released late last year, and now we might be seeing them branch out to PC.

There are various options for the subtitles, as well as motion blur and other bug fixes for the remastered adventures.

Online
ActionJackson on the 14th of November 2018 at 18:05.
Man I got this yesterday Its awesome the only thing I would say is despite all the pretty upgrades one thing stands out and thats 'how incredibly tiny' the worlds are, but its a great trip down memory lane and credit to 'games for bob' theyve done a great job of making this look pretty again we just need CTR and the PSone trilogy legacy will be complete!!! 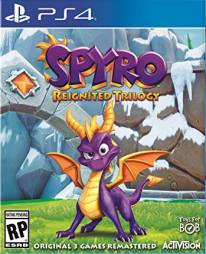