Genshin Impact is now turning two months old, and after a surprisingly popular release, miHoYo recently updated the game with new content and features on November 11 to keep the Travelers (players) happy. The team is so committed to the cause, that they gave 60 Primogems to Travelers for each hour of downtime on the servers due to maintenance during the update.

Now, our own Rebeca "Kadigan" Reinosa, who just debuted streaming for Gamereactor Live, is a huge fan of the action-RPG, and during her stream this week (available below), she tries out some of the newer content.

Genshin Impact version 1.1 main event is called Unreconciled Stars, and is all about some weird meteorites hitting the land of Teyvat and spreading a new slumber illness. It'll be active until the 30th of November, so you might want to play at the weekend if you want to grab its specific rewards.

But, look below to see how Rebeca performs with her level 70-80 party integrated by Venti, Mona, Fischl, Xiangling and Razor. 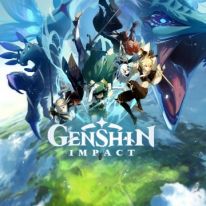