Warriors Orochi 4 Ultimate has officially released for PC, PlayStation 4, Switch and Xbox One today and a launch trailer was released alongside it. Warriors Orochi, which is a crossover series between the popular Dynasty Warriors and Samurai Warriors franchises, has received plenty of new content with the Ultimate edition, which is available both as a standalone game and through an upgrade pack for those who played the standard version of Warriors Orochi 4.

The "1v1000" game in which various ancient gods join forces to go up against Odin and his army features 177-character cast and a brand-new Infinity Mode which has players clear the Trials of Zeus, a 12-tower dungeon mode that will offer players XP, new character unlocks and weapon upgrades as they go through the gradually tougher levels. Aside from the Trials of Zeus, Sacred Treasures are not interchangeable between characters and new side stories have been added.

Those who purchase Warriors Orochi 4 Ultimate on any system will get to download the Ryu Hayabusa costume for free.

Check the new trailer out below.

"If you're truly invested in the world it might be worth it, but if you didn't enjoy the base game, there's not enough new content to change that."

Warriors Orochi 4 Ultimate is out now on PC and console

Omega Force and Koei Tecmo released a new trailer along with the latest game in the Warriors Orochi franchise today. 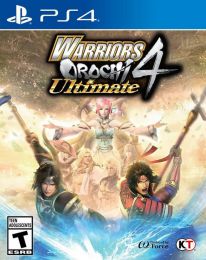