We've been poking camels in nostrils, dressed sumo wrestlers, tickled hairy chests, kicked sheep off couches full of cats, picked nostril hairs with the stylus, sucked snot, and squeezed the last toothpaste out of the pack. Not things you tend to do in most games, but then again WarioWare isn't your vanilla video game either.

We're well versed in mini-games, but what makes this franchise unique is the fact that these are not just mini-games, they're microgames. Events that take 3-4 seconds to play and then you're on to the next activity. The pace gradually climbs and all of a sudden you're faced with boss battles that mix things up. For those who have played WarioWare previously, this is a "best of" album of sorts where most of the microgames from the previous seven iterations (we include Game & Wario and WarioWare Inc.: Mega Party Games).

The various events have been reconditioned with new visuals and for true fans such as ourselves, it feels that enough tweaks have been made for it to feel fresh. The mix of events also contribute to a new sense of variation and overall flavour here, as some events are played with the d-pad and a button, others using the gyro, and some others using the stylus, and a few that make use of the microphone.

The latter ones are clearly the worst, but there aren't many of them and therefore it feels okay to blow up balloons every now and then. The rest of the microgames are brilliant throughout. The game in the series we've played the least it WarioWare: Smooth Moves, simply because the Wii-motes lacked precision and it was a toss-up whether we failed thanks to our inability or the lack of precision offered by the controller.

Here there's none of that, and among the over 300 microgames we haven't come across a single event we'd label as poor. Sure there is the occasional game that isn't as immediate, but that's it. Once we've played them twice (or as an exception three times) we know exactly what's asked of us and the climb up the ranks can begin. Cause that's where a lot of the appeal with the portable WarioWare titles lies. While the stationary installments are meant to be played with friends, Wario Ware Inc.: Mega Party Games for the Gamecube is the reason the console still resides next to our television thanks to the brilliant concept where you can play up to 16 players passing the controller along as you play, the handheld editions are more focused on entertaining the solo player.

This time there's an unexpectedly well-crafted story mode where Wario arranges the games you compete in, with lots of categories each with its individual storyline. They have been enhanced through short animated clips and voice acting, which makes the worthwhile and often incredibly entertaining. It takes around two hours to play through the story, but then there are tons of things to unlock (Nintendo trivia and small things to do with the game), and that will take you a lot longer. It's not really something that adds much to the game in our opinion, but thankfully the game itself is enjoyable enough to provide lasting appeal.

No matter how wonderful all the various microgames are with their dry Japanese wit, there's one category of microgames we enjoy the most, the ones based on classic Nintendo titles. All of a sudden you're climbing as Donkey Kong Jr. in a remade version of the Game & Watch classic, the next second you're flushing away goo in Super Mario Sunshine, before drifting around Rainbow Road in the original Super Mario Kart. The mix makes no sense whatsoever, and those who know their Nintendo history (preferably even pre-dating NES) has plenty of fan service and love to look forward to. There is something special about being Pit and shooting Medusa's eye or hearing the Super Mario Land music as you're peppering a piranha plant with a fire flower.

There's so much love poured into the events that it makes it fun to go after high scores. Initially, it can be difficult to clear 20 microgames, but soon we're able to clear 30, 40, 50, and so on. It goes so quickly and the pressure is making our mouths dry as we try and clear each stage as we go. If you take on the challenges in All Mixed Up the microgames appear randomly. Here you could be tasked with going from blowing into the mic to send seeds from a dandelion flying, to play curling with a stylus, only to pull off a band-aid using the gyro next.

The time in between the microgames is just about enough to shift grip (you're informed how to play the next event), and be prepared as the next game kicks off. The fact that there are so many microgames actually meant that it took us a considerable while to see them all.

If you've never played WarioWare previously this is the best possible game to get started with. There's an abundance of everything fans love about the series that makes for a great package with brilliant presentation. If you've played a lot of WarioWare previously it is also easy to recommend this. It's better, more polished and worked through, and visually more striking, than any previous title. It's a brilliant package with lots of extras.

We had pretty much retired our Nintendo 3DS after the introduction of Switch, but thanks to WarioWare Gold we're going to have to bring the unit with us on our next trip. We enjoy it tremendously and we hope to an edition similar to WarioWare Inc.: Mega Party Games of WarioWare Gold will make it onto Switch sooner rather than later. Fingers crossed.

Advertisements
Gamereactor UK
+
Over 300 good micro games, Lovely design, Great humour, Will last a long time, Outrageous sound effects, Nice presentation, Lots of variation.
-
Pointless things to unlock, Takes up a lot of memory space, The micro games that use the microphone are mediocre.
is our network score. What's yours? The network score is the average of every country's score

"We had pretty much retired our Nintendo 3DS after the introduction of Switch, but thanks to WarioWare Gold we're going to have to bring it with us on our next trip."

Here is the launch trailer for WarioWare Gold

Trailer and demo land ahead of July 27 release date.

WarioWare is finally back, this time on 3DS

Wario Ware Gold to include 300 mini-games. 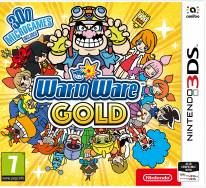