Sometimes it is hard to draw a proper line; when does a game stop being a game and becomes a program instead? Brain Training: How Old is Your Brain is one example. Is it really a game? And how about Wii Fit? Nintendo challenges our conceptions, and constantly find a new audience for their games. Yet I can't help thinking that Wario Ware: Do It Yourself draws a pretty firm line.

Sure, there's about 100 mini games you can play (which isn't that many, considering it's a Wario Ware-title), but the big news in Wario Ware: Do It Yourself isn't about playing - it's about programming games. And it's so advanced that it's not far from actually building your own games from the ground up.

Just consider the fact that the game's instructions took me about two hours to get through. Luckily, they are very pedagogic and even though I have the worst memory at the office I still had no problems remembering which slider does what and I love learning how to create artificial intelligence, connect sound effects or creating my own animations.

Amongst other things. If you're completely uncreative, there's a whole bunch of half-finished mini games to poke around with, ideas and material to modify. There's also a complete paint program and also a music studio where you can produce your own tunes.

So it's not all about building cars like in Banjo-Kazooie: Nuts & Bolts or creating levels like in Little Big Planet, here you're actually building your own games. We're not talking any epics here, only traditional Wario Ware-escapades that are over in a few seconds. But there's so much work involved that you'll feel incredibly proud when you finally are able to play the end result.

I don't only have the worst memory at Gamereactor, I'm also terrible at drawing. My mad drawing skillz are about as advanced as a normally talented five-year-old. Something that only made the game even more fun. My horribly ugly ninjas, that looks like empty rolls of toilet paper, happily jumps over frogs (that looks more like badly drawn Apache helicopters than frogs) and I'm falling over laughing.

If you don't even want to try to make your own games, you can always download other peoples' (which, as usual, is reliable on the tiresome Friend Code-system) and Nintendo have promised to release their own minigames; including games from Yoshio Sakamoto (co-creator of Metroid) and Masahiro Sakurai (creator of Kirby).

Fact is, Wario Ware: Do It Yourself would have been competing for an even higher grade if it wasn't for the fact that Nintendo will always be Nintendo. Their products are almost always perfectly put together, but often comes with really stupid snags that stop them from reaching their full potential. In Wario Ware: Do It Yourself you can't use the extra storage space in the DSi for example, you can only download two games at a time, and you can't use the camera in any way. You're also limited to tapping the screen, not being able to make mini games relying on drawing the stylus across the screen. So no precision drawing, balancing acts or helping a character through a maze.

Wario Ware: Do It Yourself is probably the part in the series that I will spend the most time with, which in my case is quite a big deal since I love the Wario Ware-games. The tool for creating your own games is so good that I almost feel like a game designer, the online support is good and the mini games that are included are all filled with the usual Wario-madness. The only thing that stops this from reaching its full potential is the artificial limitations that Nintendo have put in place.

Gamereactor UK
+
Easy to build your own games, 90 varied mini games, good challenge
-
No support for DSi functionality, artificial limitations on storage
is our network score. What's yours? The network score is the average of every country's score

Wario Ware: Do It Yourself

If you get bored with the mini games included in this latest edition of Wario Ware: just make your own! 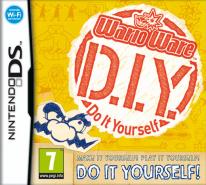