We were recently invited to Los Angeles to try out Jurassic World Evolution, a business simulation (or 'tycoon') game currently in development by Frontier Developments centered around the famous dinosaur franchise. During the hands-on session, we were guided through the game and all its prehistoric wonders, which for the most part had us hopeful for its release, and not wishing for its extinction.

Jurassic World Evolution has a similar set-up to previous Frontier simulation games such as the Rollercoaster Tycoon series, with a UI showing special events, genetic research, dig sites used for extracting dino DNA, and other elements that constitute your long-term planning in the top of the screen. On the left-hand side of the screen there's a list of options such as the map view, infrastructure, building construction, landscaping tools, and incubation of new dinosaurs, while at the bottom you're able to check your funds and other useful information about whether your park is still running well. We had no trouble finding our way through these intuitive menus and their submenus, and what's even better is that the controls are easy to master and feel familiar, with plenty of options for zooming in, rotating the camera, and even a sticky-cam for individual dinosaurs so you can admire your park from up close. Console controls work as they should too, with the menus easily accessible using the gamepad buttons.

The game starts with a short narrative section explained by Dr. Ian Malcolm (voiced by actor Jeff Goldblum) whom we know from the first and third Jurassic Park films. Malcolm acts as a narrator and as your voice of conscience, warning you for taking genetic research too far, but this story didn't progress much in the short session we played, which is perhaps why it didn't feel very memorable. Various characters offer contracts that reward you with funds upon completion and entice you to advance your research and propel the story forward. Our hands-on session took place on the first and easiest island in the game, called Isla Matanceros, which is one of five playable islands of the fictional Muerte Archipelago. While we expected an entire island at our disposal, it was a bit of a disappointment that only part of it was accessible for construction, with mountains blocking the edges of the map.

Knowing that time was limited, we obviously wanted to see some dinosaurs as quickly as possible, so to start with we incubated and released a small bipedal herbivore. Each dinosaur you incubate gets released from a holding pen, emerging dramatically from the jungle, which really gives you the Jurassic Park feeling and shows the attention paid to realistic movement and textures on the dinosaurs. These creatures look very true to the films and you can follow them as they walk around and eat, although we have to say that the graphics in the game weren't spectacular overall. The buildings, environments, and dinosaurs look good, but we got a feeling that a game in 2018 about dinosaurs could use a little bit more wow factor when it comes to their visual representation. On the other hand, it looks very stable and solid from a technical point of view, as things ran smoothly for the entire duration of our session. This is likely a result of Frontier's Cobra engine, which they have been developing and improving for the past two decades.

With the developer's help we then built the necessary facilities to start gathering DNA from dig sites (via the upper menus) in order to incubate our first three-horned herbivore Triceratops at the research facility. The release from the holding pen was even more dramatic this time, but by the time the second Triceratops emerged we were already skipping the cutscene. We noticed it's not only fun to watch your dinosaurs, it's also essential for running your park to keep a close eye on them (just like in Zoo Tycoon, for example). The dinosaurs require enough food and even have social needs and illnesses, as we found out when one of our Triceratops got sick soon enough. While the poor thing was struck with just the common cold, more serious diseases are a risk if you don't invest in the necessary research, so in order to heal our Triceratops we needed to build and use a Ranger station.

Rangers are one of the elements that Frontier added to the game to allow interaction with your park and its inhabitants, so we took control of our Ranger team in a jeep and drove towards the enclosure. Naturally, we tried to run over some of the visitors, but this has been disabled. From the top of the jeep, we then shot the antidote into our sick Triceratops and after that she was fine again. Later on in the game, you're able to control a helicopter to sedate or heal your dinosaurs from above as well. It's also possible to take pictures with your Ranger team, earning some extra income.

After we had constructed some more buildings, including a fast-food stand for our visitors and an additional power station, we had to make sure they had access to roads and power. Once we'd done that we noticed that we had been constructing and researching quite a few things, all without having to worry about money. We felt that the game so far was fairly easy to play, and money kept coming in from completing contracts and the visitors didn't seem to require much attention. Hopefully the difficulty will increase when the park becomes bigger and you're faced with calamities such as typhoons, escaping dinosaurs, and costs starting to rise, however, and Frontier's experience with similar games does add to our expectation that this will be the case. Our interviews also revealed that there's a lot of depth in the systems determining the popularity of dinosaurs and your park (we'll be sharing those articles with you here on Gamereactor next week, so stay tuned for that).

The developers explained that your dinosaurs get more interesting to the public if you add genetic alterations, such as skin textures, or when they gain notoriety for eating other dinosaurs, for example. The downside to your alterations is that dinosaurs get less healthy and the risk of failed incubation increases. Bigger dinosaurs attract more visitors too, but they also cost a fortune. If your prize dinosaur gets eaten or dies from a disease, your park will most likely run into financial difficulties. We didn't get to experience this kind of challenge during our short hands-on session, but playing the game and listening to the developers we can easily imagine how Jurassic World Evolution can be a tough game to play in the later stages.

Later in our session we hastily gathered enough DNA to incubate a large carnivore: the Ceratosaurus. Getting there required some repetitive gameplay, like sending out expeditions, waiting for them to return, researching genetics, and so on and so forth, but at last our Ceratosaurus emerged from the holding pen, as vicious and lifelike as the T-Rex from the films. The dinosaurs have different things that occupy them too, as they want to explore, get hungry, look for social interaction, and interact with each other. When building your park you can construct different enclosures with several types of fences to hold different types of dinosaurs separate from each other, much like building different attractions in Rollercoaster Tycoon. In order to watch our dinosaurs interact we kept all dinosaurs within the same enclosure at the incubation facility, for example, although our Triceratopses had a short fight between themselves earlier and we also saw a big fight between one Triceratops and the Ceratosaurus. All dinosaurs have hit points, attack, and defence stats that decide the outcome of a fight. We staged the fight this time, but at other times you might not want your biggest and most expensive herbivore to end up as someone else's dinner.

The Ceratosaurus ended up as the winner and with just a few minutes of play left, we wanted to test his appetite for humans. Even when removing the fences, though, the dinosaurs will not automatically attack the visitors. Our Ceratosaurus was not hungry enough yet and he kept wandering into the forest, but in the final moments of play he finally managed to kill some visitors by trampling them. It highlighted that the dinosaurs in your park have complex behaviour that adds to both realism and the undetermined nature of how your park evolves.

In conclusion, our hands-on session leaves us excited about the release of Jurassic World Evolution on June 12 this year. The game has a lot of different facets to enjoy and tackle while building your own Jurassic theme park, and best of all, unlike Planet Coaster, you'll be able to play not only on PC, but also on PlayStation 4 and Xbox One.

"Considering the differences in hardware potential between what the Switch offers and the other platforms, the fact this title runs as well as it does is a marvel."

You have until January 7 to grab this one.

And it'll be landing on the hybrid console this November.

Thank you for your time. We will take care of this matter as soon as posible
This game has to be a 'roaring' (T-rex fashion) success, so that it paves the way for more of these games to make a return. I'm pinning a lot of hopes on this game to be quite honest

Thank you for your time. We will take care of this matter as soon as posible
I just don't know what to expect (quality wise) I think it could be a stinker!!!!!
Really hope im wrong man 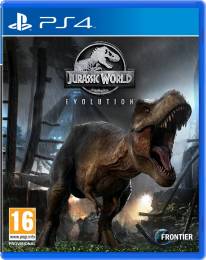