Konami have announced that the tactical RPG series Vandal Hearts is set to return later this year as a digital download. The game is a prequel to the original Vandal Hearts originally released on Playstation.

Here is a quote on the setting of the game from the press release.

"On the continent of Sostegaria, two rival kingdoms stand on the brink of war. Caught in the tide of battle is young orphan Tobias Martin. Driven to defend his homeland, and to avenge those already fallen, Tobias enlists with his comrades to fight for peace. But all is not what it seems, and they face a threat far deadlier - and closer - than they know. As the massive battle unfolds across expansive environments, players will experience party members adapting to their style of gameplay broadened by a deep range of character customization options."

Vandal Hearts: Flames of Judgment will be released on Xbox Live Arcade in August and on Playstation Network in September.

Tactical RPG on PSN and XBLA 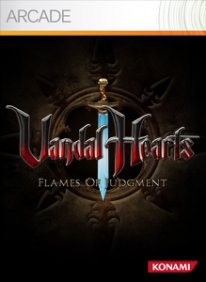