I'm greeted by the charming Olympic log for the upcoming Olympic Winter Games. "Press start", I comply. I enter the options menu, just to realise there isn't much to tinker with. It takes me a while to find the menu where I select events, it sits under Olympics, but there is no true Olympic mode. Just a list of 14 events, out of these 12 involve speeding down a hill or icy track on some kind of firewood or sled. I can choose to play them all, or play one event at a time. That's it. I choose the latter alternative and opt for some downhill skiing. I cross the line in 2:30 and afterwards there is a ceremony where a grinning Norwegian wins the gold in 2:14. I'm booted back to the menus.

Vancouver 2010 is without a doubt one of the most bare bone sports titles I've seen in a long time. There isn't much more than a list of 14 events, and I'm getting ready to sharpen my pen for a harsh review. But first I need to best that Norwegian and grab the gold. I throw myself down the hill once more and shave 5 seconds off the time. Not bad. One more try. And another one.

I'm stuck. There are Olympic titles with more events, and there are definitely those with more varied events. But Eurocom have opted to put their focus on playability. Most games of this nature have been filled to the brim without button mashing exercises. To top it off developers tend to add one or two other elements to increase the challenge, which often results in a frustrating pole vault and poorly executed biathlon.

But Eurocom have developed a system for downhill skiing that is very good, with distinct graphics, nice effects, solid framerate and exemplary controls. And instead of just including one or two slope based events, they have opted to make it the foundation of the entire title with some additional speed skating thrown in for good measure. That means there is no curling, no cross country skiing, and no figure skating.

The slopes are where it's at. There is traditional alpine skiing, snowboarding, freestyle, ski jumping (man made slope), luge and bobsleigh, and speed skating as I mentioned. Most of these with the exception of speed skating, have similar basics, but still manage to provide reasonable variation and challenge. Another nice addition is that all events are playable from a first person perspective, which gives events like slalom another dimension.

After an hour of tireless effort I manage to capture the gold in the men's alpine event (I celebrate with graceful victory dance in the couch), and that's when three friends conveniently drop by for a visit. This is when things really take off. When there is human competition the bare bone menus are turned into a benefit, and you can quickly arrange your own mini Olympics with your favourite events.

There is one major shortcoming with the approach that Eurocom have opted for. The similarity in events really hamper the lasting appeal for the single player. When I have captured all gold medals (and all achievements), there is no motivation left to shave hundreds of my times. This could has been partially mended by the inclusion of a challenge mode. These challenges can variation and alternative objectives to keep things fresh. I enjoyed the downhill skiing where the objective was to maintain top speed as long as possible.

But there isn't much depth to Vancouver 2010. You will quickly be able to conquer your artificial opponents, and you won't stay around for more after the gold is yours. Sure, you can go online and compete with others, which is fun, but it is when you compete against your friends in the living room that Vancouver 2010 really comes to life. It's quick, accessible, and entertaining while it lasts.

A few more events wouldn't have hurt. As it is now the lasting appeal is an issue, and it feels odd that Vancouver 2010 is an official title. It comes across as more of a well made challenger, that never had the official seal of Olympic approval. Except for the odd logos there isn't much to remind us of its status, no names, no stats, and no proper Olympic mode to go through as a country. Add to that the fact that all events are carried to punkrock tunes, which also puts a dent in the Olympic atmosphere.

Vancouver 2010 is clearly much better than the last few official Olympic titles, but there is still a lot of room for improvement if the aim is to eclipse classics such as Winter Games.

HQ
Gamereactor UK
+
Good controls, distinct graphics, fun multiplayer, balanced difficulty.
-
Boring when you play it on your own, several key events missing, very few options.
is our network score. What's yours? The network score is the average of every country's score

An Olympic game to be proud of?

The official Olympic title from Sega

Sega to publish, Eurocom to develop 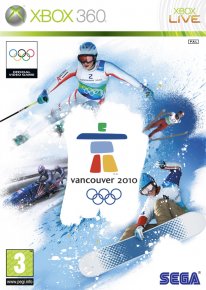