Vampyr is a third-person RPG adventure game that exudes gothic charm through dark themes of death and the presentation of moral conflictions. Full of ambition and creative ideas, it is a game that aims to combine the importance of choice and the challenge of combat. Unfortunately, despite some inventive mechanics, it falls some way short of the best of its type.

Taking place in an otherworldly 1918 London, the Spanish flu epidemic is rapidly killing the population and vampiric monsters are roaming the streets at night. Dr Jonathan Reid, a stern and stoic doctor, intends to cure to the city from the epidemic, however, he has a secret; he is a new vampire who needs to find the vampire who created him.

As Reid, the player quickly discovers his vampiric weaknesses, like the typical aversion to sunlight and crucifixes and being unable to enter a home unless invited. We also learn that he is well-spoken, short-tempered, and very intense. While this fits with his conflicted nature, it also makes him quite unlikeable.

At the core of gameplay in Vampyr is Reid's need to travel between the four accessible London districts so he can find clues about the epidemic and his creation. To get to each location Reid navigates streets and sewers filled with deadly monsters, but surprisingly there are no stealth mechanics which we thought would have suited the game. Instead, Reid moves between locations by jogging through late-night London and brawling with any hostiles he encounters.

There are four enemy types: sewer-dwelling Skal vampires, beastly giant Vulkod vampires, sophisticated and ferocious Ekon vampires, and deadly vampire-hunters called Guards of Priwen. Each enemy type has different classes, such as ranged and melee, but we found little reason to alternate from a pattern of exhausting our vampire abilities before following up with some melee strikes, regardless of the enemy in front of us.

Irrespective of how skilfully we played, the fights were consistently punishing. They involve near-perfect dodging, combining all sorts of attacks, and managing health, stamina, and blood limits by using serums. To fight up close players use axes, cudgels, and stakes, but for mid-range and long-range combat there are firearms and blood powers. Running out of blood means that vampire powers are locked, running out of bullets means the gun is useless, and running out of stamina makes dodging or fighting impossible. This, combined with the fact that enemies only need to land a handful of hits to end you, means that combat in Vampyr should not be taken lightly.

There are a couple of brief diversions from fighting. At times "vampire vision" must be used to investigate story clues and follow blood trails, in a similar way to the Arkham or Witcher games, for example. There's also a smattering of fairly simple environmental puzzles that we enjoyed despite them presenting little challenge. Had these been used slightly more creatively, Vampyr could have benefitted from more of these moments, although the ones included are adequate, if fleeting.

Throughout the game players can level up, improve weapons, brew serums, and concoct cures in their hideout. These safe areas become increasingly important as gameplay becomes tougher, and Dr Reid levels-up very slowly compared to his enemies, meaning it can sometimes seem impossible to reach the next objective. This is when Vampyr's most interesting mechanic gives the player a morbid dilemma to face. Should the good doctor repeatedly fight much tougher enemies for scant exp, or should he feed upon the residents of London so that he can become a much more powerful vampire?

Whenever Reid reaches a safe district, there are friendly NPCs that are willing to chat with you, all of which have defined personalities that you can get to know by selecting options from a dialogue wheel. Also, each character is associated with others in the district, whether by relationships or reputation. This makes them great at giving exposition, but that isn't their only function - they are also the prey that Dr Reid feeds on.

Snacking on these chatty individuals grants a wealth of experience points for the player to spend on increasing health, stamina, and blood abilities, however, it's not as straightforward as simply sinking your teeth into everyone; Reid must mesmerise the NPC, an ability check that he won't always pass, and he should get to know his victims before making them dinner too. This isn't just good manners, as by discovering backstories and healing any medical problems endured by these characters the amount of exp drawn from their blood increases.

Vampyr does an admirable job of balancing being both very difficult when the player is under-leveled yet much easier when over-leveled. As a result, the temptation to feed on NPCs is ever-present. Inevitably, questions about which NPCs to feed on and how many dead people is too many have to be asked. For us, the evil path seemed like the only way to overcome a particularly gruelling boss battle that had already crushed us multiple times.

After learning their secrets, curing their ailments, and using our dark-powers to complete their errands, we mesmerised those wide-eyed NPCs, led them to a secluded area, and drank their blood. Their resulting deaths meant that the district's health declined, and places where we got particularly greedy became totally uninhabited. In fact, due to our appetite and some story decisions, we actually only had one district still populated by the time we got to the end-game.

The conflict between becoming more powerful and trying to keep each district healthy is a creative idea but it's hard to invest in because Vampyr suffers from an immersion-shattering juxtaposition. It's hard to feel bad about feeding on a random thug with a sad backstory when every stroll between distracts involves mercilessly murdering everything that you encounter. Not to mention that it's natural to feel resentment towards any vampire faction that wants to be friendly because the other 20 hours of gameplay have repeatedly instructed you to murder them on sight.

In fact, the story becomes one of the biggest disappointments in Vampyr. There are a few different ideas that Dontnod tries to juggle but struggles to keep in the air. Reid goes from area to area, meets the people or vampires, does some quests, and either does or doesn't destroy them. He has some guilt about his dead sister and seems to be following endless hopeless leads in an attempt to find the vampire who sired him. Instead of satisfying conclusions most of these threads get lost in plot holes, an inconsistent timeline, and convenient deus ex machina exposition.

The visuals in Vampyr are a dated-looking mixed-bag. The gothic London game world that players inhabit looks believable thanks to some nice texture details and lighting effects, but unfortunately there's also some muddy brown scenery, peculiar NPC animations, screen-flicker, rough transitions, and underwhelming character design. Also, forget about running into terrified bystanders or any other scenic characters; this London is strangely devoid of life.

In terms of audio, players are also treated to some very good work. The squeaking rats and the thuds and thumps of combat are spot on, and the soundtrack fits the game's pervasive gloom perfectly through the use of strings, flutes, and piano. The voicework is decent as well, although it could have been more dynamic given how exposition-heavy the game is.

Overall, it has to be said that Vampyr is a troubled game. It lacks a solid identity and tries to do too much while failing to master anything that it attempts. As a result, it's an adequate game that could have been elevated had it not wasted a promising premise on forgettable characters and a lacklustre story.

That's not to say that we totally dislike Vampyr. We admire the attempt at blending conflicting narrative and gameplay styles, we also had fun with the combat and deciding who and how many NPCs to feed on. However, as Vampyr's story reached its conclusion the intriguing mechanics fell apart. We expect that genre fans will appreciate what Vampyr tries to achieve, however, a wider audience is unlikely to find much to sink their teeth into. 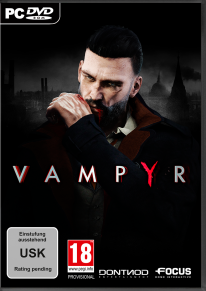