One of the PlayStation 3 exclusives that probably didn't receive the credit it was due upon release was the 2008 title Valkyria Chronicles, a game where Sega continued to develop the formula they created with the Japan-exclusive Sakura Wars series. With its alternative take on Europe circa 1935, with continental war and technological development, the game presented us to some solid turn-based strategy on console. The package came wrapped in the unique graphics engine, Canvas, which made the whole game look like a hand-drawn and gorgeous animation movie without compromising the depth of the game's story and content.

Valkyria Chronicles received two sequels on the PSP, where the best of them (Valkyria Chronicles 3, for the record) never received an official overseas release, something Sega justified by pointing to the console's marginal fanbase in the West. The user base for PS4 and Xbox One is vastly bigger, however, which finally gives us another go at the Valkyria series.

Valkyria Revolution draws a lot of its inspiration from Valkyria Chronicles, but should be considered as an independent spin-off title for various reasons (aside from the fact that Sega has told us so). Firstly, we are here introduced to a new alternative take on Europe during its industrial revolution in the 1850s. The resource ragnite, which in the original series served as an equivalent to our oil, now has magical potential as well as industrial. The magical aspect opens up the use of elemental magic. Second, the game mechanics are considerably different in Valkyria Revolution. Where the three previous Valkyria games were turn-based strategy games with mechanics that gave the feel of a more action-packed version of games like Fire Emblem, Final Fantasy Tactics or The Banner Saga, Valkyria Revolution is an action RPG with mechanics more similar to games like Dynasty Warriors, its spin-offs like Hyrule Warriors or last year's God Eater 2: Rage Burst.

The fact that the game tries out something new is not a negative thing in itself. Nothing kills innovation in this business like annual releases in a series where the content is more or less the same as last year. Still, innovation needs to be well done and result in a quality product, preferably one that surpasses its predecessors. This is where Valkyria Revolution fails on most levels.

The starting point of the game and its story is acceptable. The story's told from the perspective of two historians looking back at events a hundred years prior, trying to discover the real history that occured which the history books tell nothing about. We are brought to an alternative Europe during the 1850s, where ragnite is the source of both conflict and new weaponry, as well as an industrial revolution. The little country Jutland, squeezed between four European superpowers, goes to war against the eastern empire Ruz to regain a foothold after what has been a devastating economic blockade. The reality, however, is that the war is initiated by the will of five Jutlanders seeking revenge on the Ruz empire for burning their orphanage many years ago. We follow the story of one of these individuals, Amleth Grønkjær (good luck pronouncing that one right, all you non-Scandinavians!), the leader of the Jutland Anti-Valkyrian Squad, and the squad's battles during the war that will shape the balance of power across the entire Europe.

The game's premise is not bad, then, and the depiction of an alternative Europe is quite interesting at times, especially aesthetically. There is also some moments now and then where the story or music kicks in with something that resembles quality. Still, it doesn't take long before the whole thing collapses like a house of cards, and it's the game's story, characters and direction that reveals the lack of quality most of all.

Valkyria Revolution is a game where you spend very little time actually playing anything. Instead, most of your time will be spent looking at cutscenes and dialogue. We're not talking a few cutscenes either: we're on a level of cutscenes between each playable mission that would make Hideo Kojima himself jealous. During the game's first hour, you will spend 50 minutes watching cutscenes and 10 minutes playing a simple tutorial mission. It doesn't get any better after that, and to make matters worse both story and direction is utterly terrible. The dialogue feels self-important and excessively done, and it's never able to conceal the fact that the content lacks depth, originality and involvement. The characters are flat and boring without a single ounce of charisma or depth, and the poor voice actors have a terrible script to work from, which again affects their performances. You can forget anything called facial expressions, and character movements are stiff and artificial. As an example of the latter, it's funny to note how all characters like to turn around 180 degrees and look at something distant for two seconds before walking away, even in non-military situations. If you thought Mass Effect: Andromeda had issues regarding facial animations and movement, prepare to be amazed by the sloppy work in Valkyria Revolution.

What really kills both the story and the cutscenes is the poor overall direction. We're not only talking about the script, but elementary direction choices concerning camera movement, animations and facial expressions (or the lack thereof). The camera will often stand completely still during a cutscene, only focusing on a single character just standing there, even though the scene itself might feature several characters talking and bickering among themselves in situations that would require a certain level of body language. One particular scene comes to mind, during which Amleth enters the local bar where several of his soldiers are enjoying a drink. Instead of focusing on the soldiers who are drinking, talking and fighting, the camera is stuck on Amleth standing there watching. This goes on for a full minute before Amleth walks on and the next scene kicks in. Scenes like this show a lack of direction, and the absence of quality animation certaintly doesn't help.

The graphics never manage to impress either. Where Valkyria Chronicles was quite impressive in its time thanks to its unique graphics engine, Canvas, the Goauche engine used in Valkyria Revolution is not nearly as spectacular. As pointed out several times already, the game has a hard time when it comes to facial expressions and body movement. When in action, it doesn't take much before the number of frames per second drops noticeably. On top of that, the engine has a hard time handling light and shadow, especially in natural environments where moving trees and leaves constantly creates moving shadows. The aesthetic style of the alternative Europe is fashionable enough, the urban environments in particular, but it's not sensational in any way, and the complete lack of a standard uniform in the Jutland army is just embarrassing.

As mentioned you will spend most of your time with this game boring yourself to death through long and dry cutscenes, but this is something that could've been partially forgiven if the gameplay itself was entertaining. Alas Valkyria Revolution fails here as well. The game puts you on the battlefield with four soldiers in your unit, who will jog through the battlefield on your command mowing down any opponent in sight. In addition to a standard attack you may also dodge, block or use magical attacks. The three soldiers currently not under your direct control can be given simple orders with the shoulder buttons, although this doesn't really add any strategic nuance to the game. The formula resembles a lite version of Dynasty Warriors, except all the fun you may find in a Warriors game is completely drained out of this one. All movements are remarkably slow, and you can't create any combos with your physical attacks in any way to vary your attack patterns. All missions are more or less identical, and use the same battlefields and opponents over and over again, thus killing any motivation you might have left. You might experience a short burst of triumph now and again when killing a particularly difficult opponent, but we should be getting more than that from a game that asks for at least 35 hours of your time.

There's no denying it; Valkyria Revolution is a disappointment. The game comes across as an independent title meant to usher in the next generation of Valkyria games, but the reality is that this game takes the whole series several steps back. If you're looking for an easier Dynasty Warriors-like game or find the game's aesthetics appealing, you might find some value here. Though, if you're drawn by the style and graphics, we would recommand last year's Valkyria Chronicles Remastered, and for fans of high-paced action RPGs with a lot of depth and variation, Nier: Automata is a much better option.

HQ
Gamereactor UK
+
An honest attempt to renew the series, the starting point is good, some examples of good moments in the story and music.
-
Pompous script which tries to conceal some truly poor content, horrible direction, slow and repetitive game mechanics without death or challenge, technically weak game.
is our network score. What's yours? The network score is the average of every country's score 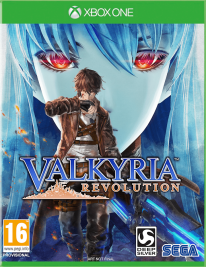