As you might know, Microsoft has a concept called Free Play Days, where they offer one to two games each weekend that all Xbox Live Gold/Ultimate users can download and play for free, always with good discounts for those wanting to keep playing the titles after the free period ends.

This weekend is no different, apart from the fact that we get no less than three games for free. The first one is Sega's tactical RPG Valkyria Chronicles 4, a game about the Second Europan War with larger than life characters and really enjoyable gameplay. A fan-favorite we highly recommend you check out now that it is free.

The second title is another Japanese RPG; Shining Resonance Refrain. It is somewhat reminiscent of Bandai Namcos Tales of-series and an entertaining adventure that offers most of the staples fans tends to love with this subgenre.

Finally, there is Naruto to Boruto: Shinobi Striker. As you might expect, it is a fighting game based on the Naruto universe, but this one has the twist, having you fight in a team of four players and face off against others online.

Will you be playing any of these to Xbox One this weekend? They will be playable and discounted until 08:00 (GMT) on Monday. 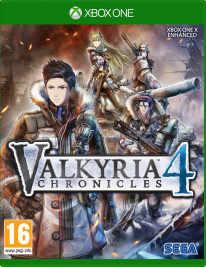