The term "freely inspired" allows you a lot of elbow room when creating semi-fictional accounts of historical events. It's the phrase that opens Valiant Hearts, the digital-only story-driven puzzle adventure set during World War I, and one we returned to check after we watched the end credits draw to a close.

That's mainly because amongst the accurate, horrifying portrayals of key battles and weaponry during the period, we're also introduced to a villain who waves his fist a lot and continually escapes by zeppelin, and the search for a scientist who may have the key to the invading army's plans. An odd little bit of hollywood glamour sprinkled over serious subject matter.

It's a strength to developer Ubisoft Montpellier that these overly-theatrical beats that serve as the story's middle act don't overwhelm the otherwise stoic take on the Great War you'll find elsewhere in its four chapter story, one that interweaves four, arguably five, different but gradually interconnecting perspectives over a half-decade conflict that swallows all of Europe.

Each character has their own story and skills you take onto the battlefield. Pulling the trigger, however, is rarely one of them. It's a game about war, but not a war game, and the gameplay pulls more towards your classic point and click adventure rather than your cult 2D side-scrolling shooter. You'll play subjective observer to the conflict, and while you're repeatedly in danger you'll be more focused on pulling switches, solving puzzles, reviving downed comrades or sneaking through enemy territory, than pulling a trigger.

Basic mechanics are introduced quickly and remain the heart of the gameplay for the duration of the eight hours or so game time (a number that can be lowered significantly if you charge through and ignore texts and collectables. We suggest you don't), with the occasional segue into timed-based variants.

While there's plenty of variety to the puzzles, the increase in complexity comes at a snail's pace. It's setting and situation that give an illusion of urgency to your actions. Most revolve around pulling a series of levers in correct order, working an item trade chain between multiple NPCs to get to what you need, finding cogs, handles and other context-important objects. Even the most complex setup, which sees you play the trade game across multiple buildings of a POW camp, is fairly easy once you've scouted out potential interactive elements. There's nothing obtuse about puzzle solutions.

There's a few time-based puzzles thrown in as well. Dodging artillery, gunfire, timing flames to ignite dynamite as it's thrown at your target. Hardest is the latter stage healing mini-games as you control Belgian nurse Anna, built in action-rhythm style as you time button prompts to surgery. But fail with any and you're reloaded back to just before the sequence begins. All but one (a late-stage dig through a shell-filled-cave with artillery ripping holes above you) are simple enough to learn on second run. It may seem too easy, but then the game's focus isn't on the puzzle work, but the story. The developer wants you to experience everything.

Because this is a heavy-hitting, emotionally-moving tale. Any cynicism at the developer trying to too obviously yank the heartstrings evaporates early on, and you'll be hard-pressed to guess the story's ultimate direction.

The story jumps between different locations numerous times in each chapter, as it keeps each individual's story running (mostly) in parallel with the others. With each switch there's a cut to an overhead map to track journeys, and arrival to each location introduces a selection of new, optional, text information boxes, supplied by documentary series Apocalypse, World War I, detailing historical facts about the area and the outcome of that battle. Hidden collectables are actual items used during the period, which also come with little factoids. Sometimes all these foreshadow what's to come, but are worth reading. Ignore and you lose half the experience - Valiant Hearts is as much history lesson as game.

But they also reenforce the horrible reality behind the game's cartoonish sheen. The UbiArt Framework Engine, which has powered Rayman and Child of Light, shows its versatility yet again. The detailing may be light, and there's no gore and little blood, but some sections are no less harrowing. Arguably the effect - such as one moment when you have to crawl past a literal mountain of bodies - is heightened. Imagine if the Beano or Dandy devoted their comic strips to pictorial interpretations of soldier's diaries during the War. There's no punches pulled here, and while certain sub-chapters are hard to stomach, the resultant storyline feels earned rather than dramatic for drama's sake.

As a game, Valiant Hearts is solid, pacing and structure built confidently enough to keep you playing through to the end. But it serves much better as a monument, a remembrance, to those events during World War I, and how too many lives were wasted needlessly. It's an important statement, and perhaps one that gaming, immersive a medium as it is, is best in making.

At best, it'll make you look differently at military shooters that glorify war, and try to expand your game catalogue beyond titles that equate winning to killing. But at the very least, experience this, and make sure as many people you know do so to. This is a game about war, not a war game, and its message is worth hearing.

Advertisements
Gamereactor UK
+
+ Well-crafted story, compelling adventure, central message powerful
-
- Puzzle complexity stays same throughout, scouring for collectables seems at odds with the urgency of the storyline
is our network score. What's yours? The network score is the average of every country's score

"Imagine if the Beano or Dandy devoted themselves to realistic World War I comic strips. There's no punches pulled here, and certain sub-chapters are hard to stomach."

Coming to tablets and mobiles from early next month.

Exploring the frontline of war with words rather than bullets.

Fresh trailer and screens from the latest game to make use of the UbiArt Framework.

Valiant Hearts: "It was about real people" 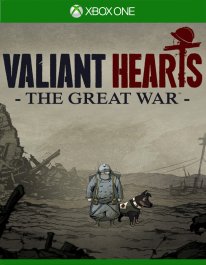