Haunted by his past and looking for a new life, The man named Nico Bellic, an earlier soldier, travels to Liberty City.

Nicos cousin Roman lives In Liberty City, who has explained Niko through E-mails that he has everything a man could imagine. Nico thinks, that Roman is a man who is covered with golden necklaces and ownes nice clothes, super cars, surrounded by women, and living in a huge house, but Nico was wrong. Roman is a man who runs an old taxi office and he is endless thick. Niko also discovers later that Romans "at the present" home is an aparment. Besides that he is also in debt because of his gambling. Niko now has enough to do.

But a new life is not the only Niko has to mind. He is thirsty for revenge. As he was fighting in the war, he was tricked and now after 10 years, he is searching after the trader.

As you can see Rockstar has put together a truly fantastic story, which gives the gamers a fantastic exsperience with each mission.

Graphics: great looking and with a new designed Liberty City that is now larger and darker.

Sound: the game has a really good voice acting and amazing sound effects of cars, weapons and explosions. It's one of the best you can experience in a game.

Gameplay: lots of new opportunities that makes the game incredibly realistic. It is a game you wount get tired of after completing the the story mode.

Durability: With its approx. 40 hours of singleplayer and a multiplayer part with lots of possibilities, it is a game that will last a very long time.

Overall, I think GTA 4 is a game that proves that games can both look good, have a wide gameplay, long duabilty and last but not least have a great story. The story is clearly the best in the game.

Grand Theft Auto is a masterpiece and will, as one of the bedtse game in the world go into the history of game's.

Thank you for your time. We will take care of this matter as soon as posible
Great review!

There are a few co-op missions online but they are limited and few people play them. It would be awesome if someone could join your story and help you through that.

I'm also happy to see Rockstar finally added the two expansions for the PC I will consider getting them as I really enjoyed GTAIV a lot. It also seems some of the issues with GTAIV have been addressed in the recent patches yay!

I had not played for some while until recently and remembered how much I liked this game. 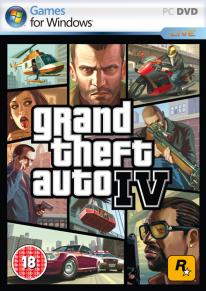