With stunning surroundings and a highly detailed Africa, I am ready for a great adventure.

FarCry 2 is not a direct sequel to FarCry. You find yourself in a detailed Africa, where the government has falln and a war has broken out between the two groups UFLL and APR. Both groups are keen on taking control and with you doing missions from both sides, it does not make things any easier.

You start the game, as passengers in a taxi. The Taxi driver says that people trying to flee the village, but only the richest people can afford it. Now it is only the fools who stays. He does say that taxi drivers also stayed.

When you reach the village, you get an infection of malaria. Throughout the game you will find the the screen becomes blurred and a loud sound starts. This is a sign, that tells you to take your medicin for the malaria.

The story in FarCry is simple. You must find and kill "the Jakel" and perform one task after another. This may be, in the long run, a bit to repetiteve. However, there has been given a lot of freedom to explore in the large Africa.

Graphics: The game runs on cryengeine 2, which helps, give the game a very realistic image of Africa. It is hard to put a finger on FarCry 2 according to the design and there are plenty of places to go and explore. The fire in the game is as well, very nice. It's great to start a fire and let it destroy everything in its path. Another thing is the weapons. They are classic, but can break, as something new in a game. This gives the game an even more realistic war experience.

Sound: The voice acting is very poor. It is boring to stand and listen to people in a conversation. The sound does not provide the insight you expect to get. However, the African background music is a good idea to get the mood going.

Gameplay: FarCry 2 is a FPS. The principle is to perform one mission after another. It is very classical, but for a game in the 21 century, its not enough. Besides that, the AI in the game is very poor to. People dont really seem to detect any sign of life when, someone is standing 5 feet away from them. It makes missons pretty easy to compleate and too boring.

Durability: I only need to mention the great freedom that is given. Just step into the nearest JEP and get going.

FarCry 2 is ultimately a good game, although the lack of variation in the story and the bad voice acting. The enormous freedom, is clearly the biggest reason to buy the game.

Plus: Lots of freedom and realism.
Minus: disappointing story and voice acting. 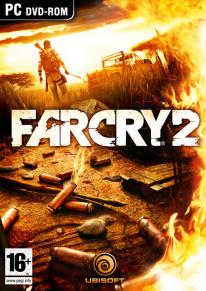 Read more about Far Cry 2 in the game archive »