There is nothing better than killing one zombie after another. I have therefore played through Left 4 Dead.

Im standing in a back alley, all alone, with a gun in the hand. Suddenly I hear an army of zombies, up to 20 in a group, come running after me. Instead of my gun I choose my shotgun and storm the nearest zombie, then after I would rush through the whole army of zombies. My 3 surviving friends comes to back me up and then we finish the job.

L4D's story is about 4 people who has survived an infection, witch has turned everyone into zombies. Now they must fight there way through armies of zombies flee from the city they are in.

We've seen it before, done it before and still thers nothing new. Left 4 Dead is a traditional FPS, which allow you to kick, "serious zombie ass." I had expected a little more of this game. As I said, it's all done it before. We've seen similar happen in other FPS games like Half-Life, land of dead and many more. Valve has simply not been able to pull "Zombie killing" to the next level.

Of course, you can go online and have LAN party with your friends and it is truely one of the best online games ive ever played.

Graphically the game looks a bit boring. The actual trailer for the game is nice, but you will be disappointed when you start the game.

The gameplay, is all about killing zombies, witch is fun but just not enough for the next-generation games.

The sound in the game, is excellent. It manages to give the game a scary mood. You can sometimes get chills, when you hear the screams coming around the corners.

The single-player mode would probably take a few days, to get through which I thought is way to short. Besides that I had no trouble compleating the game. It was very easy. The multiplayer will be played alot more than the singleplayer mode.

Plus: intense moments, good multiplayer.
Minus: too short and repetitive.

Thank you for your time. We will take care of this matter as soon as posible
Great review of the game. I have over 70 hours logged on Left 4 Dead it is still a great game to jump into to kill zombies for a while. What kept the game going for me was once there were finally some custom maps released from the player base.

Left 4 Dead:
Pros - Great zombie killing fun, good multiplayer
Cons - You are completely reliant on your team to do something as simple as to get up off of the ground. It makes me feel like my character may as well be an elderly woman who uses a walker as a primary weapon and I need help to get up when I fall.
- The tank...just plain annoying. You can kill 1,000 zombies no problem. But this one zombie that hit the gym and has a bad case of roid rage comes out of nowhere throwing cars at you.
- Short linear maps so game play can get repetitive

In the end, good zombie killing fun wins out by far. 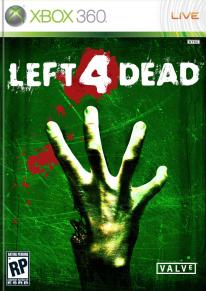 Read more about Left 4 Dead in the game archive »