Final Fantasy is a series that I have mixed emotions about. I was never a massive fan, back when it was a SNES game I owned a Sega Megadrive (Genesis if you're from the US) when it FF7 hit the PlayStation I was playing Grand Theft Auto, Mortal Kombat and Resident Evil (thanks liberal parents). I tried a Final Fantasy on the PS2 but combat was based on dancing and I was quickly put off. The first Final Fantasy I played proper was 13 and to say the least I was a bit underwhelmed. Perhaps it was strange then that I chose to give FFXIII-2 a spin but I was curious and curiosity led me to find a discounted version and commit some series hours to semi-turn based CP grinding.

Being determined to find out what it is that makes final fantasy the pinnacle for most JRPG fans I set myself the task of isolating the appeal. The gameplay is pretty much standard JRPG fare, repetitive but rewarding. The storyline is epic but no more so than any other JRPG and not as good as some. So what is it? In my humble opinion it's the awesome visuals, like the latest Pixar release the one thing that is guaranteed is visual excellence. The combination of fantasy tropes and sci-fi settings is a potent and visually distinct one and every cut scene looks like it was rendered for a big budget movie.

The story, though not always coherent, is certainly ambitious. The player controls the main characters, Serah and Noel, travelling through time to alter history and save the future. On occasion they battle huge monsters or the honourable but villainous Caius but most of the game is destroying enemies far weaker than yourself with just a handful of hits. Serah and Noel meet some entertaining new characters and reunite with some old friends as they traverse space and time. NPCs are intriguing and less irritating than the chirpy Vanille or grumpy little sod Hope. Hope actually returns in a significant role but fortunately he's all grown up and less prone to sulking throughout the entire game. In the last game everything felt outside of the players control like they were simply following a conveyor belt between story arcs so it's very refreshing that right from the beginning the player feels in control of their own destiny and that every action has a significant impact on the game. The stories only real down points come during the end game which, without giving too much away, basically nullifies all your actions up to that point.

Square Enix has certainly done what it can to appease some of those disillusioned by FFXIII. The checklist of complaints was clearly handed to everyone working on the development who then set about ticking them off one by one. For one thing there's a lot more opportunity for optional exploration and side-quests, unfortunately these aren't terribly well thought out, often being little more than a fetch quest and usually adding nothing to the story.

Dialogue options have been added but these don't affect anything beyond the immediate conversation making it far too easy just to choose the first option every time.

XIII-2 can be enjoyable and the refined use of characters and added exploration is a definite improvement on its predecessor. Unlike the previous instalment in this one you are not limited to running a linear gauntlet of increasingly challenging enemies but instead have the freedom to travel between worlds and take on objectives at your leisure. Movement around the game world is a welcome addition but it's not as integrated as it should be. There are too many unchallenging platforming sections and the landscapes are a lot less impressive than the last game. Occasional frame rate problems sneak in and I find it difficult to explain the painfully slow load times.

One innovation is the inclusion of a monster character in your party. Monsters can fulfil various roles and can be switched to best compliment your chosen method of attack. The new monster catching element has a certain Pokémon-like charm where the pull of catching the perfect team is enough to entertain for hours alone.

Combat hasn't changed much, the basic classes are identical and switching between formations hasn't changed, nor has the necessity to chain Ravager attacks before stunning them and spamming the heavy Commando attacks. It's not a bad system but is repetitive and can be frustrating. Most of the time the game feels too easy, involving little more gameplay than spamming the auto attack button. When the harder battles emerge and some tactical skill is required it's a nice change of pace but unfortunately these are too far and few between to make the game any sort of challenge. The unfortunate situations whereby you enter a battle you can't win until you've gained more experience still exist and can be infuriating as it becomes apparent that progression is less about skill and more about the hours spent thumping weak opponents.

Overall FFXIII-2 is an improvement and a step in the right direction for the flagging series. Unfortunately it's still not up to the expectations associated with the name. It's difficult to see a future where Final Fantasy is the pinnacle of role playing again. Somewhere, somehow Square Enix need to smash the formula to pieces and stick it back together in a way that is entirely new but feels so familiar. Give this a go if you're a fan, or curious but don't expect fireworks. FFXIII-2 is a nice little game but is not going to set the world on fire and the ending is truly dreadful, ME3 has the best ending ever compared to this and the sour taste it leaves does linger. 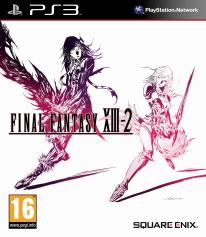 Read more about Final Fantasy XIII-2 in the game archive »