I have now played through Bioshock and what an adventure it was.

"They told me, son your special, you were born to do great things, you know what, they were right",

high screams are heard from a crowd of people and the next thing is your in a plane crash.

This is the first thing you hear at the beginning of your journey through the ocean where the hidden city of Rapture, is kept. However, the main character Jack was on his way across the Atlantic ocean, as a passenger on a plane, when the plane suddenly crashes into the sea with him as the only survivor.

After a long swim through the mass of flames into the sea, Jack spots a a lighthouse, in the far distance. What he does not know is that this is the entrance to Rapture.

The game unfolds, literally, in the atlantic ocean. Deep down lies Rapture hidden away from people with mutated people, Little Sister and Big Daddy´s.

The people in Rapture has been mutated because of an infection. Bigdaddys are giant robots who protects the little Sisters. These little sisters may look harmless, at first glance, but try your best not to harm her, or else the Big Daddy will give you a lesson. The year is 1960 a year after the Rapture went under. Rapture downfall begins during New Years Eve 59/60. You get to know the story of Rapture through radios Rapture´s residents took advantage of. They explain which horrors they had to go through.

Graphics:
the game offers some of the best watereffects ever. To see the water drip down from the screen, when you walk through the water is absolutely brilliant. Rapture itself is well thought of and you can hardly wait to explore it, the first time you arrive.
The animation looks alright. Rapture and the Big Daddy´s are well animated. However, the human facial animations looks like something back from the ps2 era.

Sound:
You get chills when you hear all the action around you, even when it is quiet. The sound of a gun going of, is amazing. The voice acting also does a great job. You can clearly hear that it was not just random people 2K ( the company ) used for the voices.

Gameplay:
Bioshock offers not only a exiting story but also a gameplay with plenty of stuff to do. Bioshock is set up as a first person Shotter and puzzle game. That is why Bioshock is filled with all sorts of puzzles to solve. Upgrading of weapons is also well thought of. You can upgrade your weapon to anything you like.

Durability:
The story and the mass of freedom given in the game gives BioShock an extremely, fascinating atmosphere. However, the story in Bioshock feels a bit to short.
In all bioshock offers you a great First Person Shotter exsperience and great action, difficult puzzles, amazing story, thrills and entertainment. really worth the money.

Plus:
The story, weapons, Universe and the effects 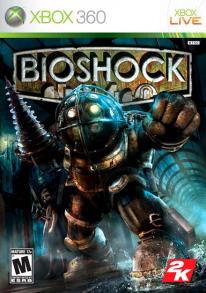 Read more about Bioshock in the game archive »