I have been a big fan of the movie Guardians of the Galaxy since it came out in 2014. So when I learned about Telltale Games would create a telltale series out of the franchise I was in! The first episode was release the 18th of April 2017 and without spoiling anything. The story are heading off into a pretty neat start. But even though the story for the first episode are great (and a bit surprising for a guy who has not dug all the way into the story of the Guardians), the games does suffer from some problems.

As a telltale game the story are the star of the game, which we definitely see in this game as the gameplay are quite dull in all. To be fair I need to elaborate a bit around my reasons for calling the gameplay dull, because it is pretty much borderline to being a normal tv serie on Netflix! The only thing which actually differentiate this game from some of their other titles are the new interactivity, which I will return to later on. Firstly i have to dissect why I do not like the way the gameplay works in this game. I have always seen this genre of games as being a puzzler which then rewarded the player by the next chapter in the storyline. You as a player had to explore your surroundings, solve the puzzle and then proceed through the story.
This kind of gameplay are at a minimal for Guardians of the Galaxy, all you have to do is basically to find the correct spot in any given area and you will have solved the "puzzle" and press the right button when the quick time event appears. You do have the option to switch a hard mode on, which essentially means the interactive elements in the game will not be shown unless the cursor points at the area. But that's a pity excuse for a point and click puzzle solve. This kind of gameplay make the game stale and boring to play. As said before the story are really good and I look forward to see where it leads, but it's not the gameplay which excites me. I made two playthroughs of the first episode to see how the story would change accordingly to my choices and this is where I discovered a really sad development. It is not possible to have more than 1! save in the game. So if you like to play these games and have some fun with the story I regrettably have to inform you. It is NOT Possible! In a franchise who boast about how the players choices make a difference this game doesn't really keep what is promised. Personally i did not see any difference in the story from my first playthrough to my second, but bare in mind. This is the first episode, so a lot can (hopefully) happen. The true star of my second playthrough was the interactivity.

Telltale has made a pretty neat feature (as shown above) where others can join the game through their smartphone or tablet and be active in the decision making. I decided after my first playthrough, which I did alone, to try out and stream the game with some friends. This is where it got interesting because your friends and family will be deciding how the story goes. Which could sound a bit like a downside, but it was actually more fun to play the game in this manner. This is simply because the stale gameplay I mentioned before where just a way to go into the decision making and then try and convince your friends of the best choice. In this way the metagame became the true game and not the stale point and click on everything you can see. This system and the overall storytelling was my only reason for not dislike this game, because the franchise seems to move away from the classic point and click story puzzle game to a more interactive social game series, which very well could be on Netflix.

In this last part of the review I will have a focus on the story, not as what it is about, but how it felt like, I felt like I was back in the cinema to watch the movie from 2014. The atmosphere with the carefully picked music in the right moments was a delight. It was furthermore a fun experience to play as Peter Quill and actually try to make some role-playing as a intergalactic antihero. Besides the games starts of with you fighting Thanos and you have to save the Galaxy again. all in all Guardians of the Galaxy: The telltale series are not a masterpiece for it's genre, but it's a damn good game which I would recommend for you to play. I played it on PC, but the game is available on multiple platforms, so I could imagine this game would be good for a fun night together. As already stated this game are a part of a series, so i will make a follow up, if something changes in any sort. This is just my first impressions of the game and I am waiting for the rest of the tale. 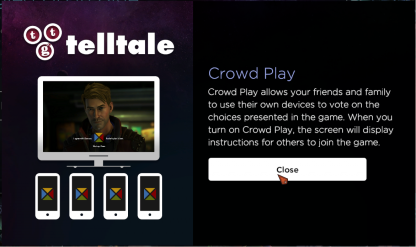 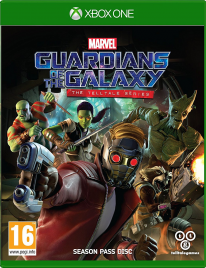 Read more about Guardians of the Galaxy: The Telltale Series in the game archive »