Splinter Cell is a stealth game of Sam Fisher, an ice-cold killer that does not hesitate two seconds before he takes a liv.Nå he is back in Splinter Cell Conviction, ready for more blood and murder. Is this just a poor successor of the successful series or a wandering masterpiece? Find out here

No multyplayer. Is me on the servers where

Are Sam Fisher back ... He's hungry, hungry for revenge. Daughter of Mr. Fisher is dead after being hit in the persecutor Double Agent. The game begins that Sam Fischer sits on a resturang where a waiter comes to serve him a phone call from an old colleague named Anna Grim has juicy information on the daughter of Sam Fisher was not killed in an automobile accident. Sam Fisher will also hear that he has a whole gang of villains from the Black Arrow, which is a orginisasjon the USArmy has hired to help them to rule the country. Sam manages to escape vanelig Black Arrow, and puts his trip to a museum as some of Black Arrow user base. You will learn about light in retrospect that mr.Fisher tells his daughter about what you can do in the dark, and how good it is in the dark. It does not just her fear of the dark much. Sam Fisher must now find out what happened to his daughter and take revenge on whoever killed her in any way.

In the dark Sam Fisher can enjoy themselves just like I do with graphics. Marvel is just one of the 1000 words to describe grafikkeni Splinter Cell Conviction. The mixing amount between black and white color that dark is usually black and white. When Sam is hiding in the dark and nobody sees the screen appears in black and white. Oh when he is in the light or the people he sees there is color filled. The graphics are very very beautiful to watch. The texture is well performed and really worked with. On the walls when you running around to do your missions so it says what to do with the lights on the walls, and it also cuts the old days to tell you a little about what happens.

The enemies in the SCC are simply idiots. You shoot a dude they are looking for 2 minutes and you move in 3 feet from where you killed that man. When they know that Sam Fisher is nearby as are they just there to talk about what to do if they see you or how bad their boss is. When they see that all their friends is shot in the head, they are just looks strange to them as they go further and look after you. That's what all the enemies in most stealth games do. You seem a lot easier to walk now what was in the old Splinter Cell games. But Sam is more brutal than ever. I miss to be able to sneak past the enemies I'm struggling a bit with. But now I have to take all the enemies. One can try to sneak past the enemies and you can do it at times. The shootings may feel like I am playing Uncharted again for shooting the feeling is quite similar in my eyes. But equipment can not I complain about everything from the harsh electromagnetic pulse (EMP) of grenades you throw on the wall and works like a camera. It is also fighting many tough weapons there.

I go soon sorry to hear that the guards shouts that they can not get into that they think I'm there. It's the same voice acting for all the guards and the same commands 20 times in a row. It's boring to hear. But over the music. The music reminds me a lot about James Bond just a little more cooler. When you are in the shade to playing as you hear nothing in particular music, but even the guards will notice and there will be a quick stressful song that pumps andrenalinet high up and make you act faster. I think this game is to last a long time that there is simply entertaining to simmer in the minds of the enemies since they're so stupid.

Conclusion </ b>
I actually liked this player, but it was too short for me. I do not care about the multi-play on the shoulder in such games. Only single play shoulder. Would like to have played this once more that it was very entertaining to drawn people out of windows and dryle people in the mirror and toilet. It is a good 3 person shooter that is mixed around with a stealth game.

Holdbarehet 9 / 10 - Small history but is good enough to play through the two and 3 times.

Best Moments : When I made lots of noise with Stick camera and got 5 + guards against it so I blew it.

worst moment : When I realized how stupid the enemies really are.

To you like : Do mixtures of Metal Gear Solid and Uncharted. Or just like stealth game with much brutality.

Minus
Idiots of any enemies.
Card Games

Thank you for your time. We will take care of this matter as soon as posible
Ermp... Please do not mix English and Norwegian words, people from other countries may not understand what you mean with it.

I haven't read the whole review(since I'm lazy) but i will correct the beginning for you.

Splinter Cell is a stealth game of Sam Fisher(nope, Sam Fisher didn't make this game, but he's the main character in this game) , an ice-cold(i think "cold blooded" is a better term to use killer that does not hesitate two seconds before he takes a liv("life", not liv). Nå("now", not nå) he is back in Splinter Cell Conviction, ready for more blood and murder. Is this just a poor successor of the successful series or a wandering masterpiece? Find out here

That's what i noticed for now. I can see that you have done wrong a few more places more, but even i am not sure how to correct them : p.

But just a tip, don't write any more reviews in English(or at least not in a while), because you suck in it(no offense) : p

Butbut, better luck next time, if it is a next time.
Thank you for your time. We will take care of this matter as soon as posible
You know i used Google Translater since im lazy xD

I just want to update the english side

*MacGyver Theme*
Thank you for your time. We will take care of this matter as soon as posible
could somebody PLEASE tell me why they decided to change conviction in the FIRST PLACE O_o??!? 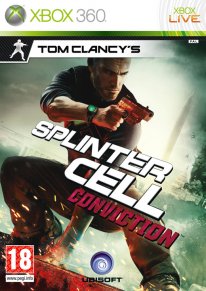 Read more about Splinter Cell: Conviction in the game archive »