The world of gaming's funniest game developer is back with the long-awaited rockgame Brütal Legend. But is it living up to its expectations?

If there is one thing you can't complain about when it comes to Tim Schafer, is the originality of his games. Games industry is affected by simple, ordinary games, and it's probably therefore Brütal Legend secured the attention of many gamers around the world.

The game deals with Eddie Riggs - a roadie based on the musician and actor Jack Black. During a concert a stage collapses over Eddie, and it's dripping blood on his seemingly magical belt buckle. This results in him being sent to the alternate world - a world where the environment is characterized by the metal genre. The inspiration is taken from the record covers and music to include Iron Maiden, Manowar, and Ozzy Osbourne.

Eddie harbors words in this world where metal guitars not only makes epic music, but also shoots out lightning and fire. He wakes up in a temple on top of a mountain built of bones, where he must fight against the monks and monsters with the help of a powerful guitar and a monumental axe.

He soon meets a woman named Ophelia, who helps him get away from the temple. She takes him to a place called "Bladehenge" in which it lives a group of people, which is dominated by a tyrant. Eddie will naturally help these hospitable, metal-loving people, and getting into an adventure to defeat the tyrant, his subordinates and his superiors.

At first glance, are Brütal Legend a blood-filled third-person action game, but there is so much more than that. The important parts of the game, the battles conducted in the proper RTS-style. You command your troops to gain control over resources in the form of "fans", only to have the opportunity to produce more troops.

The main objective of these battles is to tear down the opponent's scene, but it will not be easy. The enemy has in fact the same purpose, and is not of the type that gives up so easily. Just to separate the army from your opponent's will prove to be impossible, and having control over the various forces. When you understand that it is the carefully thought-out plan does not work because you have no idea which of the forces that are yours, but do not know about the one force has arrived at the destination you chose, or just stand in the same location as for two minutes page, you are forced to use boring tactics as three years could have been behind. This allows the gaming experience to become boring rather than tactical, exciting and thought-intensive.

The fact that the difficulty level suddenly rises dramatically in the RTS section later in the game, you have to play the same stage over and over again. Repetive games and tactics that are not close to success, making RTS part of a huge annoyance that you'd rather steer clear. In other words: good in theory, bad in practice, but it holds barely.

Fortunately, the game is filled with a lot of humor, and I guarantee that you will laugh your way through it while you will come to shed some tears too. With excellent voice acting, good sound effects and, of course, incredibly thoughtful track list, the game is immediately forgiven for its mistakes. The mood is high when you laugh you half to death by Jack Black's comments, while listening to Motorhead in Eddie's home-made car.

Despite the poorly implemented strategy section, is the battle system well. Most of the game consists of fighting in the usual third person perspective where you, as I said, use an axe and the guitar to defeat enemies. You also get various solos as you are playing the game, and these are used, among other things, to develop the car, rise relics or as an extra powerful attack. You can buy new combos, axes, guitar strings and upgrades to the car where "The Guardian of Metal", Ozzy Osbourne himself, lives. He acts thus as the game's merchant. It may be helpful to visit him now and then to be best equipped for battle.

An important part of Brütal Legend, is the exploration of the great world. It's simply fabulous to cruise around the world, while enjoying the music and the environment. For although the character design is boring and incorrect proportion wise, is the world a colorful tribute to heavy metal, which is so beautiful that you sometimes can not take your eyes off it. The landscape is not repetively nor blury, on the contrary. Everything in the slack grasslands to snow-covered tundra to the ghostly swamps to warm beaches are factors that will make you forget the missions. You will only continue to drive for hours.

The game is chock full of things to gather, places to explore and side missions. Side missions fill unfortunately not the requirements I set for the good side quests. With few exceptions, the side missions are the same thing all the time. It will continue repetively and boring, but there is nothing that requires you to complete them. However, you are virtually forced to finish some. You earn "Fan tribute" (currency in Brütal Legend) by doing side missions, which you can buy upgrades, which are highly necessary if you want to be one step ahead of those tough enemies.

Brütal Legend is an emotional, humorous and "rocky" action game that met my expectations. The wonderful music, colorful world, the humorous voice acting and long shelf life easy ways out for the game's faults, and if you're a metal fan this game is a must. 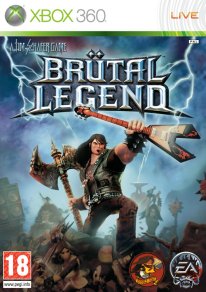 Read more about Brütal Legend in the game archive »