I'm going to start off and say that Batman is, more or less, my favourite super-hero character of all time. Those of you that know who he is, you know that he doesn't master any super-powers, but rely fully on his gadgets and strengths.

The whole games starts with Batman has taken Joker, and is on his way to deliver this psychopath to Arkham Asylum. Here you'll notice that the game will not offer any flowers and sunshine, only action and horror.

When I enter Arkham Asylum with Joker bound to some kind of thing I feel secured. Countless guards with weapons is surrounding me, ready to step in if something goes wrong. You just know that something will go wrong, but when? Suddenly he breaks free, and here the adventure starts.

The first thing you'll learn is how to fight. Some inmates attack you, but taking them down is not that hard. Just press the attack button and time the counter-button and you'll survive. Notice that you're only suited with a batarang at the start, but during the game you'll find as well as unlock new gadgets.

After you killed the inmates it's time to advance. At the first look of Arkham Island you'll notice how big it is, and even though I made it through the whole game, I haven't been to all places. The Riddler, one of Batmans nemesis', has placed out trophies all over Arkham Island, and it's all up to you to find them.

Another interesting thing in the game is the "Biography-calender", which let's you read about Batman's enemies and friends. Often in games the bio's isn't that interesting, and they're often let unseen. But Rock-Steady have written their stories, facts and attributes in such an interesting way that you just have to read about them. During your trip you can find interview-tapes starring Batman's enemies that has been patients on Arkham Asylum.

Now let's talk about the bosses. You'll remember the most of them, doesn't matter if you're a true Batman fan or just familiar with comics. But they're aren't so spectacular as they should have been. It gets too repetitive and boring after a while.

Another big plus with this game is that it's got a lot of variety. Gameplay and how to approach things. Scare-crows nightmares, predator levels, fight-sequences and so on. The different things are not brilliant, but entertaining. Some parts I found myself a little scared, and one time I even thought about turning of the console. You'll notice.

The verdict? I'm actually thinking about giving it a 10, but for having a 10 means that "everything" has to be perfect. This game isn't truly perfect, it's still a lots of things that could've been better. But the variety of gameplay gives it a 9. 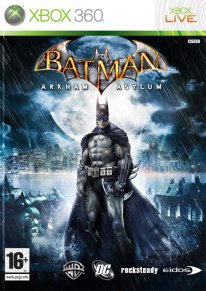 Read more about Batman: Arkham Asylum in the game archive »