Yet the thought of a portable Nathan Drake adventure lost some of its shine when someone thought to ask (what was assumedly) the obvious question of the developer's identity. When Naughty Dog's name came back as a negative, there was worry. When it was revealed that a separate company, SCE Bend Studio, would handle the handheld duties, there was a sense of crushing inevitability that this wouldn't be a "real" Nathan Drake adventure.

Based on the strength of our first hands-on impressions, we needn't have worried.

Firstly, the visuals. Because how can you not talk about the visuals in an Uncharted game. At the pre-play presentation Bend explains that Naughty Dog opened its entire Uncharted assets library - both Drake's Fortune and sequel Among Thieves - to be raided. It shows. Lush green valleys that stretch into the far distance, and scenic waterfalls flush crystal-clear water into the air blaze out of the NGP's five inch screen. You have to study closely at the character models to see those tiny, tiny signs were the handheld doesn't quite match the home console versions. Needless to say this will be the poster child for Sony's new hardware.

The studio must have also pilfered a 'How To' guidebook, because the game feels like a natural continuation of the Uncharted series. Although reportedly set before Drake's Fortune, it's rather confusingly stated as not being a prequel.How it ties into the wider Uncharted continuity will be revealed in time. Also fact fans, Sony inform us the demo video shown when the game was first announced was lifted directly from the game proper - so start gleaning over that for clues.

At today's event in a hush-hush location by London's river Thames, there are two demos on show, each loaded onto different machines.
Done in logical order, we're first relearning our climbing skills and digging around for artefacts in the game's opening section, then skipping ahead to apply those skills to a more action-orientated section in the second demonstration and also let us test out the combat system. Both sections showcase the additions to the gameplay using the NGP hardware.

One slight aside before we dig into that; whoever's scripting the game better be being paid well. The opening cut-scene, full of companionable banter and sarcastic asides as Drake saddles up for a mountainous climb with a friend, has us snorting with laughter, Nolan North proving why he's the voice-actor of choice by many these days - his weary every-man the John McClane for the digital generation.

Gameplay then. The first ten minutes helpfully eases you into the extra control choices without the fuss of a separate tutorial. Gesture-based contextual commands (i.e: touch the screen and flick your finger) allow you to clamber over ridges and small rises. Climbing along a tree trunk between platforms will require you to use the in-built gyro-sensor to balance Drake as he carefully navigates himself along it, while swinging on ropes lets you tilt the handheld back and forth to build up momentum.

Climbing up and along cliff faces lets you multi-touch Drake's route beforehand. A glint of silver will outline the potential grip-holds on the screen - simply tap those smaller outcrops of rock and slide your finger along longer handholds in sequence to watch Drake replicate the route a second later. Danger dodgers alternatively can tap one point at a time to play safe. There's a sequence early on that flips the camera overhead as you edge over a derelict wooden bridge, making you tap each slat in turn to cross, leaps turning into curses as boards break and you're left hauling yourself up from dangling over the rivers below.

Alternatively you don't have to tap the screen at all for any of this, instead use the classic button and stick combo. But we found we increasingly used the touch screen as it gave us the illusion of a deeper degree of control over Drake, without the gimmicky feel that comes with touch technology. Shallow or subtle? It depends on how you view touch control over digital inputs.

Bend adopts the story concept to nicely tie-in with the touch screen as well. The bridge sequence is book-ended with a process that might get you odd looks if you try it on public transport. Ancient engravings need to be copied through the process of stone rubbing, requiring you to stroke the screen repeatedly to complete the transfer onto paper.
A percentage indicator clocks your completion ratio, and while you only need ninety percent of the etching to carry on, there's likely some bonus for getting the full one hundred on each one - a sub-menu tracking all the game's hidden secrets suggesting good reason to get the full quota of treasure hunting goodies.

Onto the second demo and the jungle is blanketed in night, and we're sneaking through what's labelled The Snake Temple. The section gives us a better idea of how the NGP holds up in action sequences. Obviously the second stick is a boon, letting us pan the camera round to scope out guards while we slide along cover. Sneak up behind one and an on-screen icon flashes up. Touch and a nice little takedown move will kick in. Weapons dropped, upgrading you from pistol to AKs and the like, are heavily outlined by a gold sheen, though whether this is a concession for the darker surroundings alone or will a standard is unknown.

The duck and cover mechanics convince, especially when we're having to shimmy back and forth round a overhang hanging onto cover with one hand and shooting with the other as soldiers peel out of the ruins below. Its when sniper rifles come into play that the title suffers its first misstep as the gameplay isn't quite as clever as the design. Pulling up a scope view forces you to physically move the NGP round to find a target, and between the struggle for a precise aim that comes with the weapon and holding the NGP just right, the setup quickly looses its charm. Handily a quick tap of the aim button will initiate a auto lock-on for all weapons, easing prolonged frustrations.

While the sections are short, they provide plenty of promise that the future of Sony's portable entertainment division won't hang on a lacklustre offshoot or a port of a pre-existing game. Blockbuster in your pocket anyone?

"If you jump on board you're treated to an exciting action adventure that fits neatly into the Uncharted series."

Naughty Dog: "that's not completely out of the question."

Another Uncharted for PS Vita was nixed by Naughty Dog

Staring into the Golden Abyss.

Drake Vs The Burning House. 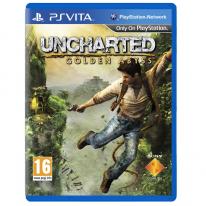