Welcome to the future. Mankind no longer exists - and all that remains is cold darkness, living metal beasts, and psychedelic neon lights. It's never easy to imagine what the far, far future will look like, but we get the feeling that Puppy Games may be onto something with their insane shoot 'em up, Ultratron. The robot revolution started two years ago on PC, but it has spread and most recently it came to Xbox One and that's the version that this review deals with.

The humans are dead, the work of evil murder robots, and your job is to avenge mankind. That's really the only excuse you need as you run around a bunch of square-shaped arenas dishing out cans of whoop-ass to well... walking tin cans. The biggest news in this latest version is that you can share the violence with a friend on the couch thanks to the new local co-op feature that has been added.

More than anything it reminds us of the cult classics Smash TV and Robotron, where players must take down everything on screen while avoiding waves and waves of enemy projectiles. The charming pixel graphics also remind us of 1980s arcade games. The sound mix is a notch above what you'd find back in the day and catchy techno tunes are mixed with metal clanks that most likely have been recorded inside of actual tin cans.

Every tenth level is a boss fight against one of the four leaders of the robo-calypse, and even if this means that the game is "finished" after 40 levels, you can continue on with the adventure until you die. Our best run was to level 79, and once you die you have to start all over again. It's entirely possible that it continues on infinitely until the enemies move so quickly and fire off so many shots that your TV will explode... It's a lot of fun to see how far you can get, and your odds improve as downed robots leave goodies behind that can be used to improve your weapons and abilities.

If the game ends on level 20 on your first try, then perhaps you have the gear that'll allow you to reach higher on the next attempt; you retain your upgrades when you start anew, and there's a great sense of accomplishment when you reach and then conquer the arena where you first fell. You primary concern is, however, to repair your shield between levels, and thus players who avoid taking damage are left with more money to spend on other things. This makes for a great balance between offensive and defensive play. Unfortunately there are some shortcomings that often speeds the satisfying combat to a frustrating and premature end.

There is such as thing as too much of a good thing. Too many enemies on screen, impossible projectile patterns that cannot be avoided, intense lighting effects. All of a sudden you're dead and have to start over from the beginning. One of these shortcomings is the colour scheme used here - if a level uses a purple colour scheme then for some reason many of the enemies and their shots are of the same colour. In the heat of battle it gets difficult to tell what's what when everything is blinking and shaking (you can switch off some of the effects, although it doesn't completely fix the issue). To make things even more difficult there are enemies that start shooting before they've even appeared on screen. Naturally it feels unfair to be killed by something you had no chance to prepare for.

The longer you progress, the more crowded it gets on the screen - especially when playing with a friend as it's easy to mix up the two protagonists. In spite of this Ultratron is an addictive and charming action romp, and you'll have great fun hoovering up the fruit (!) that enemies drop that gives you points and boosts your score - perfect if you're the kind of person who likes to post their best numbers on the leaderboards.

The pricing is very kind on the wallet given the number of hours you can potentially spend slaughtering robots (the fact that it's cross-buy on PlayStation platforms is also appreciated). Who could have guessed that the end of mankind could be this entertaining?

Advertisements
Gamereactor UK
+
Addictive, Satisfying combat, Charming presentation, Challenging, Entertaining co-op.
-
Screen can get overly crowded, At times frustratingly difficult.
is our network score. What's yours? The network score is the average of every country's score

"Who could have guessed that the end of mankind could be this entertaining?" 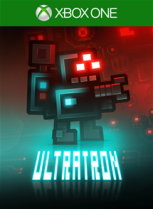