While we were very much excited by the prospect of getting a definitive and portable version of Street Fighter II, a game that we've loved for years and have played in arcades and on home console, it took only a matter of hours for Capcom to KO that excitement.

When you dig deeper into the content this version offers, after the first impression made by that Ryu animation is out of the way and the feeling that it still plays great 25 years later has been processed, it's not long before you're knocked out by a combo of realisations. After the game intro and logo have rolled, what awaits you are horrendous menus accompanied by elevator-worthy music. Some essentials have been inexplicably omitted, both for advanced players and nostalgic ones. And the extras you'd expect from a definitive version, something that this is being positioned as, are also lacking.

That's not to say there aren't positives to cover. The conversion is fine, with decent visuals and immediate response times on both TV and in handheld mode. The colour, graphics and sound customisation options are all decent as well. Perhaps the most worthwhile part of this particular edition is the marvellous concept art gallery that, for some at least, will justify the premium price point all by itself (in fact, it could've easily worked as a high-quality art book).

As for the Way of the Hado mode, you won't be purchasing The Final Challengers just to throw hadokens in first-person using your own hands. Don't get us wrong, at first the motion controls work better than expected, but they're just not at the level the Joy-Cons could perform at. In other words, it takes too much imagination and forgiveness on your part. You'll look at it a couple of times when friends are over, then you'll completely forget about it due to bland content and presentation.

Coming back to the traditional 2D combat, concerning the issues and limitations that we mentioned with regards to the controls in our preview, well, at the end of the day we got used to the slightly smaller analogue stick found on the Joy-Cons, but it's still obvious that this isn't the optimal way to play Street Fighter II. The game is not to blame, so to speak, but we hope the new Pro Controllers for Switch fix the D-pad issues so that we can wear out our "Nintendo thumb" once again. It's something to keep in mind, though, mostly if you're a competitive player and have noted that there are still no officially supported arcade sticks available for the system.

Actually, if you're one of those pro players, you'll probably decide to skip the game right around the moment you learn that there's no Turbo or speed and damage adjustments. Or that Violent Ken is too overpowered. And with Capcom not releasing balance stats, we still don't know yet whether my mid kick loses out to your fierce punch if we jump at the same time.

During your frequent visits to the amateurish main menu, you might look for more ways to play, but you won't find much. The Buddy Mode might do for some quick co-op sessions with a friend, at least until you decide it's time to fight one another. But other than that there's very little. New characters unbalance things for the most part, and we still don't know why essential elements such as the car and barrel bonus stages (come on, Capcom, it shouldn't be that tricky to redraw them in HD...), or even the local tournament mode, haven't been implemented. This being the case you can forget about your chances of finding additional challenge modes, character-focused combo tutorials, or even a museum space; all things you'll see in other games that are positioned to harness the legacy of a classic game.

So when you've already beaten M. Bison (or Akuma) say five or six times, you're left with the sad feeling that this is a game that's not serious enough about delivering what the legendary series deserves; it almost feels like a lack of respect. This is a cheap copy and paste job that's not so cheap on your pocket, created with zero love, without any real intention of adding the value needed to sell it to collectors. If you're as huge a fan as we are, consider how much fun the online multiplayer will provide you in the long term, and how much you need a perfect D-pad, then maybe wait for a sale before you go for it. As for the rest, we're afraid to say that you had better wait for a stronger, braver fighting game for your Switch.

"When you dig deeper into the content this version offers, it's not long before you're knocked out by a combo of realisations."

You can play as the character by using a code.

Capcom's CEO spoke about the Switch in an interview.

We take a final look at the upcoming Switch version of Capcom's classic fighter.

NEWS. Written by David Caballero and Fabrizia Malgieri on the 5th of April 2017 at 15:06

See a new screenshot gallery inside.

A bug in the arcade release The World Warrior paved way for YouTuber Desk to uncover new secrets.

Comes out at the end of May. 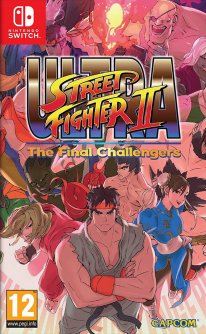