Last week saw the release of two major platform-exclusive titles: Returnal on PS5 and New Pokémon Snap on Nintendo Switch. Both of these battled it out hard for the top spot on the UK retail chart but there could only be one winner and that was New Pokémon Snap.

According to Gamesindustry.biz, the game is the third biggest Nintendo launch of 2021 so far (behind Super Mario 3D World + Bowser's Fury and Monster Hunter Rise) and its launch sales are four times stronger than the original Pokémon Snap. It also reportedly sold 2.5 times more than the last Pokémon spin-off which was Pokémon Mystery Dungeon: Rescue Team DX in March 2020.

It also reportedly sold four times as much as the N64 original.

There are five different designs and they retail for £14.99 each.

New Pokémon Snap tells you everything you should know

How is it different from the original? Get your answer here.

Six-minutes of New Pokémon Snap gameplay has been revealed

It's only in Japanese at present, however.

The game also has some form of online functionality.

Gotta snap them all in the Lental region. 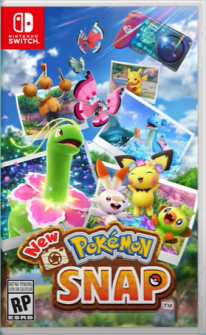