Mike Tyson is set to make an appearance in THQ's WWE 13. Tyson will be available as a pre-order bonus from participating stores (currently only for North America - we expect the European announcement soon).

For those of you confused as to why an infamous boxer is appearing in WWE 13, Tyson has some history with the franchise. He was involved in 1998 as part of the ‘Attitude Era' (which features prominently in the single-player campaign) and was involved at WrestleMania XIV (as an enforcer, not a combatant - although he did get involved).

"As one of the most dominant champions in boxing history and one of the most memorable guests to ever be featured on WWE programming, Mike Tyson led an incredible revolution that changed the way fans perceive the sport," said THQ's Sean Ratcliffe.  "He was a tremendous addition to the ‘Attitude Era' and is certain to attract a wide variety of fans to ‘live the revolution' offered in WWE '13."

Mike Tyson summed things up succinctly: "The baddest man on the planet is back - and only in WWE '13. Fans everywhere can now relive what I experienced during the ‘Attitude Era.'" 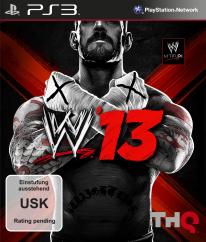