Twisted pixel has just announced its newest title Gunstringer, and two things immediately jump out at you: 1) Its designed for Kinect and 2)it sounds, as fitting from a company that created Comic Jumper and Splosion Man, more than a little bit mental.

In fact, so lovingly crafted is the developer's announcement, that we're going to print it here in full for you to enjoy. Check out the trailer and first bits of art below.

"What makes games great is that they are such a collaborative process. I have over three hundred puppets in my basement, and Bill Muehl, our Game Director, collects Western landscape photography. Oh, and of course we have Dan Teasdale, our Design Lead, whose family was brutally murdered by drug lords when he was a child, and who's been on a mission of vengeance ever since."

The player controls a marionette named the Gunstringer using Kinect's unique motion-based controls. The epic tale of the lonely gunman unfolds across several acts, each performance taking place in a hand-crafted environment.

The Gunstringer has several weapons at his disposal, each tool of vengeance unleashed through the player's gestures. The game's lavish production features over thirty characters and countless animations.

The Gunstringer is expected to be completed in 2011. Dan's quest to temper the pain in his soul with violence has not yet been given an end date."

So: new Twisted Pixel game. Involving puppets you control with your hands. Out this year.

REVIEW. Written by Ingo Delinger | Gamereactor Germany on the 16th of September 2011 at 09

"We really shouldn't have doubted retail pressure, or new tech, would have humbled or hindered the studio in any way."

Makers of Splosions and Gunstringers.

The Gunstringer demo out

Get a taste of Bioshock: Rapture

Twisted Pixel on The Gunstringer

"If you own Kinect you owe to yourself and your investment to keep an eye out for The Gunstringer." 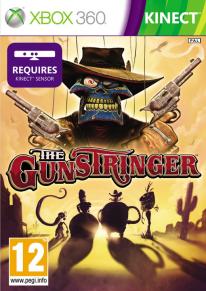 Hole In The Wall