TT Isle of Man: Ride on the Edge Review - Gamereactor

There are brave riders, fearless ones, those who are absolutely reckless... and then, there are the riders who compete in the legendary Isle of Man race, and they are made of different stuff altogether. They're the ones who are able to almost fly, reaching speeds of up to 320 km/h, on roads that were designed for speeds up to 60, missing walls and barriers by mere inches. Does it sound interesting? Do you want to know more about the competition at the Isle of Man TT? Then this is the right place to be.

There's always a reason to celebrate a motorsports title that leans towards the simulation end of the spectrum, as most games tend to feature a more arcade-focus these days. When the game is also a motorcycling simulator, which is even rarer, then the reasons to celebrate multiply.

The best titles of the genre nowadays are probably the annual installments of Milestone's MotoGP series, including their special editions, such as the one published in 2016 that focused on Italian rider Valentino Rossi, better known by his hardcore fans as Il Dottore. However, we are talking about games that ride on that thin line that separates pure simulations from accessible arcade racing created to please a broader spectrum of players.

Bigben Interactive, in collaboration with French studio Kylotonn Racing Games (who gave us WRC 7 last year), turned their attention to a very special competition in the world of Motorsport as the Isle of Man TT Race. The race began in 1907 when a clever organisation decided to establish a race on this island to avoid the speed limitations in the UK. Thanks to this move, the famous track which goes across the Snaefell mountain was born. It's a historic race, then, that has been taking place for the past 110 years. The track looks spectacular both for its environment and for the race itself, with its network of roads designed for residential traffic, far removed from the high-speed competition it hosts.

The Snaefell Mountain course is something unique, as is the pilgrimage made each year by fans and reckless drivers alike. Not for nothing, we're talking about a 60.725 km track with 264 bends and a current record of 16 minutes and 53.929 seconds, which was achieved by Michael Dunlop in 2016. That shows, without a doubt, how incredible its proportions are.

But it's not just about the length. This track, in its best section, has just two lanes with the exact width for two cars to fit, far from current competitive track standards. And that's without mentioning the sharp turns, the sections that pass through villages, the bumps, and curbs everywhere. More than 250 valiant riders have lost their lives in this race; a sobering reality check.

It's a hard challenge then to reproduce a track with such history, personality, and risk, and bring that to life in a video game. Especially, when talking about a track with more than 60 km of such vivid, varied environments such as the countryside, the towns, the mountain.... an authenticity that must be generated in the same game, without loading. And that goes without mentioning the other nine tracks included on the disc.

Thankfully this game does not disappoint. The experience of TT Isle of Man is right there, you feel the frenzy of flirting with disaster by scraping the walls and curbs, with the constant fear of not being able to control your bike after the last jump. And even if your instincts tell you to slow down, there's no room to relax.

While the Isle of Man circuit is the main feature of this game, there are another nine shorter tracks ones which bring more variety to the game. Add to this the excellent incorporation of real motorbikes such as Honda, BMW, Yamaha, Triumph, Kawasaki, EBR, and Suter, divided into two categories: SS (SuperSport) and SB (SuperBikes).

The handling of the bikes is really good and was closer to offering an accurate simulation than other titles in the genre, such as the aforementioned MotoGP or the recent Ride 2. We did feel they had an excessive tendency oversteer, but it is manageable, added more tension to the riding, and actually, it isn't that unrealistic.

In a title that puts such emphasis on one magnificent track and which is accompanied by just nine other circuits, we expected a carefully worked environment to compensate for the limited number of tracks, even if the length of Snaefell circuit already does that to an extent. And, again, the game did not disappoint, although they don't feel like the most brilliant visuals of this generation, we thought they were still best in class. This feeling gets even more powerful when we realise we are facing a 60 km track, re-created by laser measurement and with the most careful attention not only on a technical level, yet also to the surroundings: towns, geographical features, walls... the views, if you can get a moment to stop and enjoy it, there's a really accurate reproduction of the Isle of Man.

The bikes are also recreated in detail and watching the riders turning their fist to accelerate while we do the same on our controller is a really good detail that makes the experience even more realistic. However, we have to say we missed the possibility to customise the fairing, which is probably limited because of license restrictions. Another questionable point is the physics of both rider and bike when there's an accident; it isn't really realistic and breaks the experience somewhat. Then again, if you're looking at that animation too often you really need to improve your driving.

Apart from the traditional time trials, the individual races in each circuit, and the online multiplayer for up to eight players, there's also a career mode which is somewhat limited even if it accomplishes the expected basics: making the rider compete in the great Isle of Man TT, win it, and get famous.

The main highlight of the game is clearly the Snaefell circuit. Because of its length, we can run it fully or in stages. However, you have to consider its length and the fact that you can't go back in time to right a wrong. If we fall, it may be that we cannot make up lost ground, which could mean we have to give the race up as lost. That's because the AI in this game is almost unbeatable, it makes very few mistakes other than being a bit slower on the easier difficulties.

The good news is that, even with its little flaws, Isle of Man TT doesn't make any glaring errors. It is true that there is a lack of tracks, but it is justified and compensated for by its legendary centerpiece. It's also true that its graphics are not state of the art, but they are at least the best we've seen in this particular genre.

It is clear that, despite its shortcomings, we are looking at one of the most carefully crafted games in the motorcycling world. It delivers all the excitement of the legendary track. If you're a passionate motorbike racing fan, this is the game you have to try on your console or PC. That said, if bikes aren't really your thing and you hadn't even heard about the Isle of Man race, it might be a better idea to try another franchise, because this isn't a racer for the faint of heart.

Gamereactor UK
+
Remarkable graphics and sound effects. Perfect re-creation of the Snaefall circuit with every single detail that made the Isle of Man TT a legend. Licensed bikes with great handling.
-
Limited number of circuits. The falling physics frankly leave room for improvement. Lack of customisation options and a more complete career mode.
is our network score. What's yours? The network score is the average of every country's score

"It delivers all the excitement of the legendary track."

TT Isle Of Man: Ride on the Edge's scores a new trailer

Including the help of professional drivers. 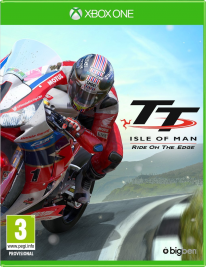