TT Games is taking the Lego series in a slightly different direction by focusing on the bad guys with Lego DC Super-Villains, and when we talked to head of design Arthur Parsons at E3 he told us that the change of direction is something that's been coming for a while.

"Obviously we've done three great Batman games over the years, and ever since Lego Batman 1 myself and the team have wanted to do a villain-focused game," Parsons told us. "DC has the most amazing roster of villains and villains just allow us to have so much fun, so we just wanted to do a story that really focused on the strength of the villains. And it's so fresh and so vibrant, the characters are so colourful, the way they work together is so incoherent and they don't get along and it just makes for a really, really fun, exciting Lego game."

We also asked about how they chose who to put into the game, and it turns out there are some interesting faces, as he explained:

"That is a challenge in itself, but our story is kind of inspired by a few comics, and we knew that we wanted to bring the Justice Syndicate into the mix. So they're the Earth 3 variant of the Justice League, and they're bad guys, so their version of Batman is actually Owlman, their version of Superman is Ultraman, and so on and so forth, and we wanted to make sure we brought them in because they're great characters that have never been explored in a video game. And yeah, it just... villains allow you to do stuff that even in a Lego game we haven't done before, and it does make for a real crazy roster."

Who are you excited to see in action in Lego DC Super-Villains? 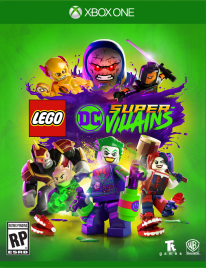