For the first time, the complete anthology of Trine will be debuting on Nintendo Switch with the launch of the Trine: Utlimate Collection. This was originally announced after publisher Modus Games responded to consumer requests during a giveaway celebrating the franchise's tenth anniversary, resulting in the full collection being revealed for Switch as well as PC, PS4, and Xbox One.

Packed with content, the full Ultimate Collection will contain Trine Enchanted Edition; Trine 2: The Complete Story; Trine 3: The Artifacts of Power; and Trine 4: The Nightmare Prince. As well as this, a whole list of added extras is also included, such as the Trine series original soundtrack, Trine 4 digital art book, a collector's reversible cover sheet, physical map of Trine 4, and a whole host of available pre-order bonuses, should you order before launch.

Trine 4: The Nightmare Prince is set to be the next adventure in the series, taking Amadues, Pontius, and Zoya on a quest to retrieve the young prince Selius - who struggles with terrible nightmares - and bring him home. Throughout the 2.5D journey, players will have to engage in puzzle platforming whilst tackling combat and boss fights here and there as they play either solo or with up to four friends.

Trine: Ultimate Collection and Trine 4: The Nightmare Prince both launch on September 30 on PC, PS4, Xbox One, and now Nintendo Switch.

Which edition of Trine will you be picking up?

The Trine series will be debuting on Switch this autumn in a mega bundle containing the complete anthology of the titles. 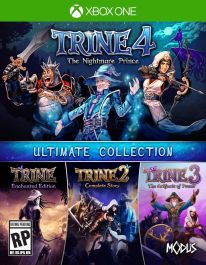