Trials of Mana, which debuted in 1995 on the SNES, is being remade for Nintendo Switch in early 2020. The title follows last year's Secret of Mana remake for PS4, which saw updated character voices and gameplay styles along with a local co-op mode for up to three players.

As of now, we don't know many details on the nature of the remake, but Nintendo has said that Trials of Mana will be "fully rebuilt from the ground up with modern 3D graphics." This puts next year's remake in-line with Secret of Mana, and we will see whether more additions are brought to the fold.

Alongside next year's remake, a Collection of Mana is also available for Switch, right now! This collection includes the first three entries in the series (including the soon to be remade Trials of Mana), although they are more basic ports than next year's full remake. This is the first time that the third entry in the series, Trials, will be available outside of Japan.

Will you be digging into this classic JRPG series on Switch? 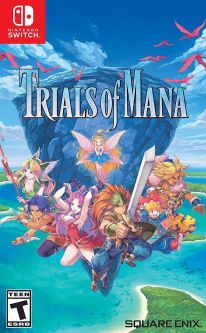