No More Heroes 3 made it into Gamereactor's list of games to look for in 2020 and it seems to be a key title to drive Nintendo Switch sales in its fourth year on the market. Travis Touchdown, Goichi "SUDA51" Suda's iconic character, will be back to fight against alien heroes - that is how they refer to themselves, at least - trying to conquer Earth. And, this time, he has at least a dozen tricks up his sleeve.

Talking about the scenario he is writing for the next Fire Pro Wrestling game developed by Spike Chunsoft, Suda revealed that Travis Touchdown would perform more suplexes than ever, taken from his idol, the former professional wrestler Akira Maeda. "The original Tiger Mask and Akira Maeda made me a fan with their suplexes. There's nothing like a suplex performed with the proper form," the creative said to Siliconera. "I've always had a fascination with Akira Maeda and his repertoire of 12 different suplexes, so I'm letting Travis Touchdown use them all in the upcoming No More Heroes 3," he added later.

Travis combines his wrestling abilities with his beam katana to destroy minions and strong bosses. We know little about NMH 3, however, we got a good look at the enemies in the trailer above.

It was previously pushed out of 2020 due to the Covid-19 pandemic.

The Covid-19 pandemic causes delay for yet another major project.

Suda-san confirms that we'll be wrestling with some new moves in the Switch-bound exclusive.

New No More Heroes 3 trailer shown at The Game Awards

Grasshopper Manufacture surprised the audience with a bizarre yet delightful trailer of No More Heroes 3.

Plus the Japanese director confirms to Gamereactor that he wants TSA t-shirts in the next entry in the series. 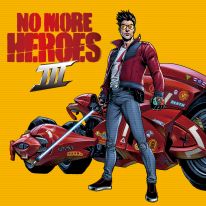