One series that seems ripe for amazing video games but somehow has never managed to hit a home run is Transformers. Giant robots that turn into cars, iconic character designs, and an epic struggle for not one but two planets - it has all the ingredients you could possibly want. Yet somehow, it's never really happened, and 2015's Transformers: Devastation stands as a recent exception and not the rule when it comes to the overall quality level. Transformers: Battlegrounds is looking to change that, however, and we'll find out in October whether the game is successful or not when it lands on PC, PS4 and Xbox One.

So what is Battlegrounds exactly? Well, it's a turn-based tactics game a la Xcom, however, while it shares the same strategic DNA, the Saturday morning cartoon vibe made me think more about Mario + Rabbids Kingdom Battle, and there's a very good chance that younger gamers will get a kick out of this one. Hell, as a fan of vintage Transformers, it appeals to me too, and I daresay there's a fair few similarly aged souls out there who grew up in the '80s who are looking forward to digging into this one.

The decision to use Gen1 Transformers (those you'll have seen in the original cartoons and the animated movie - you know, the one that starred Spock and Citizen Kane) is a masterstroke. Not only does it link to the recently released Netflix series, War for Cybertron, by using the same voice actors, but it also appeals to old-timers like me who couldn't care less about more recent spin-offs and adaptations.

Anyway, that's enough preamble. I managed to get my hands on the game for a limited demo, although technology got in the way of my hands-on, at least to an extent. I got to play a few rounds, control a couple of units, test some different attacks, and get a feel for the movement system, but the demo session was short and performance issues effectively cut my hands-on time further. That being the case, I found it really difficult to get a strong feel for the game.

I did get to see a few interesting things, however, so let me regale you now with tales of derring-do on the battlefield. I played sections from two different missions in the game's first chapter, and in the first, it was just me and my old favourite: Bumblebee. The city itself is laid out over a grid, right angles everywhere, and using action points you can move your Autobot (you don't get to play as the Decepticons in the story mode) around the place, taking cover when appropriate. So far, so Xcom, but by borrowing an established setup it's easy to navigate and learn the ropes.

The second mission I tried involved three characters instead of just the one. This time Grimlock, the Transformer styled as a T-Rex, was part of my entourage. Like Bumblebee, you have action points that you can spend on moving and attacking your enemies, and in one battle I moved my three bots into a town square and engaged in a skirmish with some Decepticon grunts. I mixed things up by moving in and out of cover (it's full cover only, there's no nuanced half-cover option here), and using both melee and ranged attacks I was able to build up the Energon bar that eventually allowed me to unleash a more powerful special attack (action points are individual, but this is a shared resource). I'd love to tell you that my Autobots prevailed and the battle was won, but my hands-on time came to an abrupt end shortly thereafter.

Alas, there doesn't seem like there's going to be a PvP mode that lets players battle each other, Autobot versus Decepticon (one shall stand, one shall fall, of course), but there is a local co-op in the Arcade and that to me looks like the kind of thing I might play with my nine-year-old son, taking it turns to play tactically on a team while directing iconic Transformers around the city streets. I didn't get to see that at all during the demo session, but I'm intrigued by the prospect of playing as the Decepticons in the Arcade, and there are several modes there to choose from (Decepticon Grudge Match, Energon Capture, Horde, Last Stand and Destruction).

In fact, the word "intrigued" sums things up pretty succinctly for me. I didn't get to see too much of the game but I like Transformers and I like tactics games, and this ticks both boxes. Whether it's got enough depth to appeal to a grizzled old-timer like me is another matter, however, younger gamers could find it to be an inviting entry point into the tactics genre. If the chance to control the likes of Optimus Prime, Bumblebee and Grimlock appeals, you should keep your optics on this one when it lands on PC, PS4, Switch, and Xbox One on October 23.

"Transformers: Battlegrounds is a game that caught me by surprise. I knew what I was in store for with a game tailored for younger players, but I didn't expect to find a strategy with so much depth."

New video shows how the Transformers: Battlegrounds theme song was recorded during lockdown

Transformers: Battlegrounds will roll out this October

A new isometric view and some classic-looking bots are coming to PC and consoles later this year. 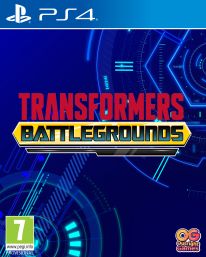