My dear mother has told me that if there was one thing I loved unconditionally as a child it was Lego blocks. Today, I tend to think that there was something about the immediacy of having an idea and realising it straight away that had me hooked. And it's a concept I still find incredibly appealing.

I have spent countless nights building skate parks in Tony Hawk, drawing detailed fantasy settings for Heroes of Might & Magic III and designed my very own playgrounds of death in Halo: Reach. Trackmania 2: Canyon should be a perfect fit for me, as it is a racing experience that relies heavily of user creativity. It's a game made as much for your inner architect as it is for the racing fanatic.

From a gameplay perspective Trackmania 2: Canyon is arcade racing at its purest. The arrow keys are all you have to worry about. Accelerate, break, left and right. The sense of speed is so overwhelming that I feel as though I'm piloting a jet. You perform massive jumps that puts Evel Knievel to shame, speed down vertical drops and force you vehicle into wide drifts. There is an increased focus on drifting this time around, where it was only a last resort in previous games. This time around you don't lose as much speed when you drift. Instead drifting is encouraged.

Thanks to the simple controls anyone can enjoy Trackmania 2: Canyon, even those who normally don't touch racing games. That said, the difficulty can ramp up quickly depending on what track you're playing and what medals you're gunning for and the battle for supremacy on the online leaderboards is razor sharp.

Playing online is a major part of the experience. Upwards of 200 (!) players can compete in one race. During normal circumstances this would have been a technically daunting task, but Nadeo has managed this by simply eliminating all kinds of collisions between players. It's you versus the track, and the other players are simply there as visual references. It comes across as racing against ghosts, but this is happening in real time. Each round gives you as many tries as you want within the allotted time to clear the track, and at the end all player results are listed.

It's a unique and well functioning system we recognised from previous entries in the series. If it was a race where physical rules applied it simply wouldn't be Trackmania. If you'd rather race locally there is the option of competing with a friend on a split screen.

At the moment almost all modes focus on getting to the finish line as fast as possible. The popular platform and puzzle mode from previous games is sadly missing. In general the content that comes with the release is rather bleak- you've just one environment (Canyon). Nadeo obviously plan on releasing more titles with new building blocks, game modes, environments and updates in the future, but until that happens we will have to rely on the community to provide us with content to keep the game fresh. Thankfully, the community is already coming up with great stuff.

The foundation is laid with the track editor. The tool comes in two versions, simple or advanced. The advanced tool is actually rather accessible and can be mastered quickly. The area you're building on is grid based and on it you place bits of road, jumps, loops, tunnels, turbo pads, etc. Simple yet encompassing. Just have a look at the thousands of user-created tracks that are available online to see just how much diversity these simple building blocks can result in.

For those who want to take it one step further the game has been designed with the mod community in mind. This is where the truly ambitious use their creativity. I've already downloaded a couple of mods that transform the brown and orange canyons of the original release in to lush, green fields and arctic tundras. There are also new car models, building blocks and textures that pop up from time to time and I really recommend players to keep their eyes peeled on the official forums for the latest news. The only thing it takes to elevate your experience of the game is a little bit devotion and patience.

And this takes me to the next subject of the review - the link between the game and the community - Mania Planet. Designed to make the process of downloading and uploading user created content easier, but it is still very apparent that Trackmania 2: Canyon is one of those typical PC experiences where user accessibility has not been at the core of the design. Creating new car stickers for example: instead of just being able to read normal picture files through the in-game menus you are forced to go through the following process:

1. Open the picture in Photoshop (or similar). 2. Save the file as a TGA, and do not forget to create an alpha channel. 3. Create an icon that goes with the image. 4. Name the file correctly and find the correct place in the filing hierarchy of the game to place them in. 5. Now you're set to pimp your car in the game.

This isn't really that hard with a bit of guidance. But it could have been made so much more user friendly. Nadeo would have been well advised to look at console titles like Little Big Planet 2, that allows you to do pretty much the same thing, but in a much more streamlined form. This is something that rings true for most of Trackmania 2: Canyon. It works well, but requires a lot of the user.

The soundscape is relatively anonymous, and doesn't take up much space. Some adrenaline pumping rock tracks, instead of weak electro and some more heavier engine sounds would have been nice. As it is, it's stuck in limbo in between good and bad.

The visual presentation on the other hand is almost flawless. From a graphical standpoint is looks gorgeous (the one major difference from previous titles). The car models are great, the environments reflect off the hood, and a number of effects makes it a joy to behold on more powerful computers, while the game has been engineered to run well on less powerful rigs as well.

In an effort to tie it all together, the small kid who adored Lego blocks would have been over the moon with Trackmania 2: Canyon. And regardless of whether you want to build stuff or just enjoy what others have created - Trackmania 2: Canyon provides.

REVIEW. Written by Daniel Steinholtz | Gamereactor Sweden on the 26th of September 2011 at 11

"Regardless of whether you want to build stuff or just enjoy what others have created - Trackmania 2: Canyon provides."

Closed beta kicks off in July 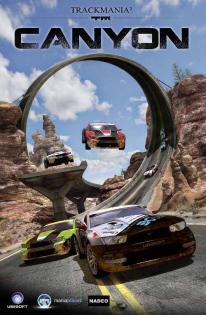