We had been hoping for the best, our fingers crossed until the very last moment. Our nostalgic memories of Tony Hawk's Pro Skater 1 and 2 are still wonderfully warm and cozy. We recall pulling off advanced tricks, grinding to our favourite songs, cruising great levels looking for new spots to ride. We retained a glimmer of hope that Robomodo would succeed in recreating the immortal magic of the first two titles, and even if that wasn't what we expected, we did hope for something that would at least come close.

But as soon as we knew that Tony Hawk's Pro Skater 5 wasn't coming in time for launch, we had a pretty good idea of what to expect. We saw what was coming from far away, an impression that wasn't improved by the fact that the Day 1 patch is actually bigger than the game itself.

In the absence of a review copy, we had to look elsewhere. Thanks to our friendly neighbourhood shopkeeper we were able to get our hands on a copy earlier this week, and since then we have been in a terrible mood. This game is frustratingly bad, frustratingly unfinished, sloppy, and consistently disappointing.

The developers, Robomodo, don't have the best of reputations, previously known for the poorly received Tony Hawk: Shred and another less-than-stellar offering in Tony Hawk: Ride. The first thing that strikes us as we start Tony Hawk's Pro Skater 5 is just how ugly it is. The graphics would seem right at home on PlayStation 2, and the simple fact that the overall art style was changed in wild panic only a few months ago says something about the desperation with which the project was handled.

Our skater moves flimsily, the animations are far behind the ageing Skate 3, and the gameplay feels clumsily limited and messy. The skater moves almost by himself in an automated fashion and today, in 2015, this sort of self-propelled game mechanic just doesn't cut the mustard. It never feels as if you're actually controlling a man standing on a skateboard, but rather it's as if you're driving around in a wheelchair. It's clear that the developers came to a point where they simply couldn't sort all the problems and just decided to give up.

There are a couple of talking points. There's a special meter to reward us if we manage to keep our clumsy skater standing, which isn't a bad idea, but it doesn't add much besides the light blue smoke generated from our skateboard. The Slam function is another new feature that was described as a convenient way to more easily link tricks, but it doesn't work very well at all. The idea is that the player should be able to cut his "air time" instantly and land with a "slam", something that feels rushed and turns out to be a horrible idea. We miss virtually every gate/rail during our first four hours with the game because of the Slam mechanic; it feels troublesome and lacks the necessary precision.

The stages are not very good either. There are certain skate parks that work out well, but most of the time they're inconsistent and feature incomprehensible narrow paths where invisible walls make it impossible to find that beautiful smooth ride found in the early games. The stages are crammed with advertisements for everything from clothes to watches and energy drinks, something that makes Tony Hawk's Pro Skater 5 feel more like a free ad-funded project than a full on retail release.

Most of the online features leave a lot to be desired as well. The idea was most likely to create a seamless online world stuffed with up to twenty skaters roaming across the same level. The feeling when we tested the online component, however, is the opposite of that: the whole world feels hollow, empty, lifeless and surprisingly dull. Add to this the fact that it takes several button presses in the menus prior to each mission as you jump between challenges. The presentation could have been so much better if they just looked back at the previous games in the series, particularly those from Neversoft.

None of these factors, by themselves, are the reason why Tony Hawk's Pro Skater 5 deserves such a low score. Sure, the skating is self-propelled and uninteresting, and some of the stages are small and dull, but it's all the glitches and technical problems that the game suffers from that pulls down the grade so low. The bugs are in plentiful supply here. We'd go as far as to call launch failures like Assassin's Creed: Unity, Driveclub and Halo: The Master Chief Collection almost "bug-free" in comparison with the unfinished mess served up here.

Skaters get stuck in the surroundings and stop us from pulling tricks. Elements are missing from the environments, the ground becomes transparent, the game freezes, reboots itself, and the framerate drops from 60 frames-per-second to something like four. And this all happens regularly. The camera frequently goes on vacation, stops following our skater, and just darts off (or starts to vibrate uncontrollably). All this despite the fact that we installed the Day 1 patch that weighed in at 7.7 GB before we started the game.

However, these bugs aren't even the worst thing about Tony Hawk's Pro Skater 5. The worst thing is that the game, on more than one occasion, froze and then cleared out our save game, which forced us to start from scratch several times. All this is of course totally unacceptable and it's a shame that Activision went ahead and released this mess.

REVIEW. Written by Petter Hegevall on the 2nd of October 2015 at 18

It seems as if Activision is working on a return for the franchise, and skateboarder Lizzie Armanto has added fuel to the fire.

The most famous skater the world has ever known confirms the split.

Tony Hawk is working on a new game, but not with Activision

Skateboard legend hasn't given up on video games. 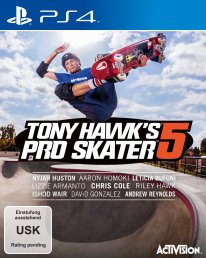